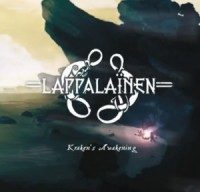 For those of you waiting for the new Korpiklaani album here is something that will keep you at bay….the debut album from France’s Lappalainen. Sounding like a mix of some Bay Area thrash and some good old fashioned folk metal, the debut album features 10 tracks following the release of a 2 song EP (“Road To Greenland”) back in 2012.
Band wise, I think they sound like a folkier Yonder Realm with more folk instrumentation (tin whistle mainly by Victor) with a smidgen of Equilibrium and Grimner thrown in for good measure. There are tons of great thrash elements here as they also remind me of Cruadalach but less folky/hardcore and more metal. So yes, do the math, somewhere in between Yonder Realm and Cruadalach lies the Lappalainen sound. Vocalist Florent reminds me of “Low”-era Chuck Billy with his guttural style but also is able to hit those raspy highs as well, which is a nice change as one style or the other would get monotonous. The relentless bass playing of Thibault and double bass drumming of Robin seem to be in danger of running of the rails in some cases, but they keep it together for sure. I think the guitar playing by Thomas and Cesar is what reminds me the most of Yonder Realm’s duo of Jesse and Jorge, not necessarily in style but in tightness and the ability to play off what the other is doing. The tracks average about 5 minutes in length which is great for this style. Songs on my favorites list include “Riding On The Load Of Hay” with a nice acoustic guitar middle section and the 7 minute long closing title track. Production is decent with no specific issues, kind of right down the middle although I was concerned about some instruments sounding a little out of tune or something not 100% right with them, specifically guitar in some parts.
I can’t put my finger on what it is but it doesn’t take away from the overall listen. A great first album worth giving a try for sure!!!