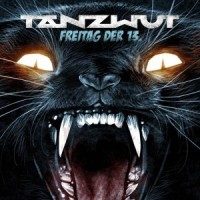 Teufel is back and brought his bagpiping and rocking soulmates of Tanzwut along. After the Medieval tunes on their last year’s album ‘Eselsmesse’, we get an Mittelalterrock (Medieval-rock) album this time.
Just like on ‘Höllenfahrt’ their album of 2013 they kept on the somewhat more heavy path.
The tracks are nice and solid and peppered with delicious catchy bagpipe-tunes. The catchy bagpipes played by Thrymir and Pyro are Tanzwut’s trademark and can be heard throughout the whole album, accompanied by the solid guitars, they bring the Tanzwut sound close to the (older) In Extremo sound. But Tanzwut puts things in a darker perspective, either in the lyrics like in Brot und Spiele or in the music as well, like in Die Zeit heilt alle Wunden. It’s all a bit dark, but else would you expect with the devil as leadsinger. This way of working around delivers a sound which is quite similar to the the previous album and this is very nice for the fans of a bit heavier sound, and that’s the way I like it. This rock-album is a nice counterpart to their Medieval albums, where the sun shines a bit more and it has all a slightly merrier touch.
Tanzwut has simply made another great album with this one, and they can add a few songs of these albums to their playlist. Ohne Sünde, Der Zeitdieb and there are more of them on this album, are simply songs, we as fans like to hear them play live.