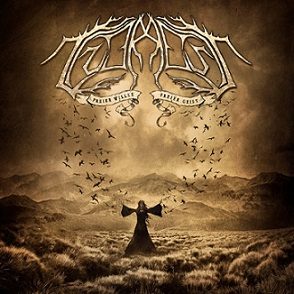 Germany’s Thormesis have returned with a new album entitled “Freier Wille Freier Geist” (“Free Will Free Spirit”) following the release of 2012’s “Von Leere und Tod” (“Of Emptiness and Death”). These pagan/black metal warriors are not as pagan or as black metal as you may think, but I feel lean more towards melodic death but not as over-the-top-riffy… or maybe they are in some yet-to-be-determined classification or sub-genre.
Despite that opinion, for some reason the first album that came to mind listening to this was the last Woods of Desolation album “As The Stars…” (one of my favorite black metal releases of 2014) but with more of an extroverted feel as opposed to a solitary/loneliness tone. Dissection, Finsterforst and Dimmu Borgir are also possible comparisons here as well. The riffs have a smooth, accessible feel to them, very warm, dark and dirge like. Tracks like “Weltenschrei” (“World Screaming”) and “Mein Letztes Lied” (“My Last Song”) really have that layered guitar sound which really personifies the Thormesis sound. What is also nice here as well is the non-reliance of constant blast beats to create the mood….the mid tempo parts are more than adequate to do the job allowing the songs to travel on a black path (where you are also headed) while listening. Thormesis is joining a group along with bands like Adabroc, Mire and Amiensus that, for me, live in that space between dark folk and black/pagan metal, carving out a niche that fans of both genres should gravitate towards. I think what I really like about this is album is that it is accessible, what I mean by that is you do not have to be into black metal necessarily to get into this and that is the sign of an artist not writing tracks to fit into a certain structure but letting nature take its course. The result here is a nice album with solid production and musicianship. Great release.