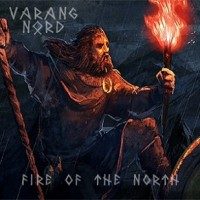 Jump back to 2007 in your memory and you may remember a band named Балагуры (Balaguri) who put out one album “Великая Русь” (“Great Russia”) and then called it a day. Now they have reformed some 7+ years later as Varang Nord and released their first EP entitled “Fire Of The North”.
The original sound, while still heavy, had more of a folk metal based feel to it then this new release. “Fire Of The North” definitely has more of a pagan/Viking sound with some touches of the old Balaguri sound. The almost 7 year layoff has given this new configuration more focus and direction as I feel this release has more memorable moments than their earlier work. First of all the production is much better, heavier, cleaner and smoother all around. Reference points band wise would be Amon Amarth, Vanir or maybe a little Grimner so definitely a very strong Viking attachment. All 6 of the songs here are between 3:18 and 3:49 so they are quick listens which is fine but it would be nice to hear a few longer tracks to see what else they can come up with. I don’t feel that the song ideas here lose any steam but I think they should try to push themselves and write some more epic style songs along with the standard tracks they have already established. I was hearing a lot of Manegarm here as well on tracks like “Fires Of The North” and “Sacrifice For The Old Gods”.
The musicianship here is solid all around with nice touches of accordion to break up the guitar work and add another dimension to the sound which is the strongest connection to the old sound for me. I think that they have done the right thing here with the name and style change. Unlike Wartha, whose latest release “Azure Lakes” bears little resemblance to their original releases, Varang Nord does not have the attachment to the older material due to their time away and only one release to refer back to anyway. You may want to go back and grab the Balaguri album just as a reference, but it is not a necessity.
Just think of Varang Nord as a brand new band with a nice first EP to check out. I hope to hear some more from them soon, especially some longer tracks to challenge themselves and push their sound even further.