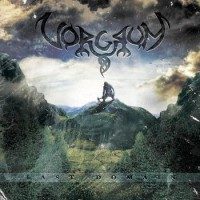 Argentina’s Vorgrum have returned to release their first full length with “Last Domain” following their 2011 debut EP “The Awakening” which was a killer initial offering. Self-described as “Pagan Metal”, I would say they sound more like bands such as Finntroll, Trollgasm, Rogatiy Kolokol, Abracadabra, Svartby, etc….almost over-the-edge, borderline humppa, troll hyper speed folk metal.
Vorgrum are yet another example of not necessarily following what the tag is, self-placed or not. If you need further proof, most songs are 4 minutes or less…really not the hallmark of a Pagan Metal band. Whatever the tag is, “Last Domain” needs no tag to clue everyone in to fact that this album is a nice sock to the jaw folk metal release (meaning it’s good). As a matter of fact I was listening to “Blodsvept” earlier today and this reminds me a lot of it (if I have to tell you what “Blodsvept” is, please stop reading). At just over 40 minutes, “Last Domain” will be in my heavy rotation for sure this year. There are tracks that are straight up fun fests (“Drunkard Anthem”, “Troll Villa”, ”Potato Troll”) creepy forest tracks (“Unleashing”, “Scaring Us To Death”) and everything in between. There is also a hint of Cradle of Filth in here too in the blast beat drums and chewing on splinters and broken glass vocals. The songs are not overdone and finish where they need to finish and then move onto the next. The use of the accordion and the keyboards here are really what puts the finishing touch on the tracks here, dancing around the thrashy guitar parts and relentless bass and drums. As this is out on Bandcamp, I can only assume it is self-mixed and produced which is well done here, great guitar sound equally thick and gritty as it is clean and precise and very well rounded sound overall, full and punchy. This is a release that may go under most people’s metal radar which is almost criminal.
I hope that Vorgrum really start gaining some momentum with this release. I think removing the Pagan Metal tag may help garner some new fans if they just stick to folk metal as a description but that is just splitting hairs at this point. Move over soy, cereal and meat, Vorgrum just became one of Argentina’s main exports, awesome debut album.