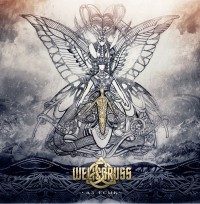 I think in most cases, change is a good thing as long as it is towards the better. Such is the case with the new Welicoruss release “Az Esm’”. When I mean change, I mean a change in line-up and locale (moving from Russia to the Czech Republic) and a change in sound, but not dramatically so.
Previous efforts reminded me of Dimmu Borgir from back in the day but coming from a definite Pagan angle and less a Black Metal approach. There is still a connection to their past, but so much more in addition on this latest album. With the inclusion of a multitude of guest musicians playing or vocalizing on “Az Esm’”, Welicoruss have created a bridge between the old world and the current one, being a history lesson of sorts but more from a mythological and spiritual perspective than just facts in a book. Alexey Boganov (the main creator of Welicoruss) has really tapped into the feelings and raw emotional energy of his homeland, which reminds me of hearing “Elegy” from Amorphis for the first time or Borknagar’s “Urd”, they are not similar stylistically but all have a feel and lyrical tone that connects you to what you are hearing. There is an underlying theme here that carries you through the album in its entirety, but I wouldn’t call this a concept album but more of a journal to a more conscious state with Welicoruss as your guide.
As heavy as initial single “Sons Of The North” is and the accompanying video, I feel that there are songs here that are much heavier, and I mean reading the lyrics and the thoughts/concepts behind them will hit you like a ton of bricks. Much like Primordial’s “Where Greater Men Have Fallen” (Album Of The Year 2014), “Az-Esm’”takes me to a place few albums can… in touch with something larger than man even knows exists. Although sung in Russian, there are English translations to all of the tracks and you will be doing yourself a great disservice if you do not read the lyrics while listening. I have really just scratched the surface of this album as I feel it will take a few listens to get into even more than I am after a few listens and that is the sign of a great album…. wanting to hear again and again and discover new parts to enjoy.
The production is clean and heavy, with all instruments finding space to breathe and are highlighted where need be. I guess the change in line-up and country has served Welicoruss well in many ways and for our benefit, too. Moving away from that which you hold most important sometimes allows for the perspective to appreciate how much you really long for it. That longing and tribute has been etched here for all to embrace here with “Az Esm’”… an amazing record.