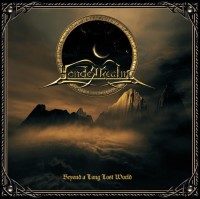 Sometimes, here at the site we are afforded the opportunity to review albums that have gotten re-issued for one reason or another (recent Forefather re-issues come to mind). Now that the mighty Yonder Realm has been signed to Maple Metal Records, the label has decidedly wisely to re-release some of the earlier Yonder stuff which includes “Beyond A Long Lost World”, a 6 song EP originally from 2011. For those of you who are addicted to “The Old Ways”(Yonder Realm’s first full length and 2014 top 10 album for me) and are not familiar with this release, it is what I would call a “no-brainer” that you should have this in your collection. The same catchy riffs, brutal tempos and folky touches are here as they have always been in the Yonder Realm sound. This EP is a little “rougher around the edges” so to speak, maybe a little more thrash oriented and less folky than “The Old Ways” and simpler in song structure and style, which is exactly why you should grab this. Whether you have heard it before or not, visiting this is what makes Yonder Realm great….if you didn’t know any better you could even think this is a brand new release and not one from 4 years ago. It is like Yonder Realm just dropped out of the sky with their sound and didn’t really have a period of getting to their sound thru the trial and error of a few releases. If anything in listening to this, you will hear the maturity of their sound from this release to “The Old Ways”, not gigantic leaps but progression in venturing into new song styles and writing on a more other worldly level. From the opening of “An Oath” to the epic EP closer “To Never Return”, Yonder Realm has created material that is a necessity in a multitude of different metal heads collections, be you into folk, thrash or anything in between.
Thanks Maple Metal for getting this out there for everyone to enjoy. Yonder Realm has always used the tag of “Cosmic Folk Metal” which after listening to this again seems even stronger than ever… now, excuse me while I board the mothership to other side of the universe.