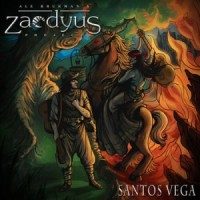 Zaedyus is a self-tagged “folk progressive metal” group from Argentina and was formed by Ale Brukman who wears many hats here (songwriter, producer, percussion and backing vox). There are a total of 6 tracks on “Santos Vega”, based on a poem by Rafael Obligado. (Santos Vega is an Argentinian minstrel of legend and lore) Clocking in at around 20 minutes, I would call this an EP due to the overall length and this is where I am confused about this particular release. I would call this a concept based release, so why only have it be less than 20 minutes long and not a proper full length? Think of Iron Maiden’s “Rime of The Ancient Mariner”, one song that is 13+ minutes long also based on a poem. If you are going to attempt a concept release, I think you should either make it a longer release or put additional material to fill in the blanks (King Diamond’s “Fatal Portrait” did this to success…a few concept songs with other non-concept tracks on the same release). Whatever the case for the abbreviated release here, I was certainly hoping to hear something symphonic and full of instrumentation, based on the amount of musicians involved in the process of making this, 12 including Ale. Unfortunately, that is not the case, as most tracks are very stripped down in structure and I would call more “acoustic” based with female vocals. There are two tracks here (“The Minstrel’s Song” and “The Voice Of Progress…”) that are the most successful in my opinion, having a style reminiscent of a less progressive Dream Theater.
At the end of the day, I was disappointed at the lack of “folk”, “progressive” and “metal” as they proclaim themselves to be. There are obviously some talented people involved here and I think it is just a matter of getting a fully realized concept together as I think “Santos Vega” was great as an idea but misses the mark for me. I would like to think a future release will have more of an edge to it with a more focused approach and identity to it.