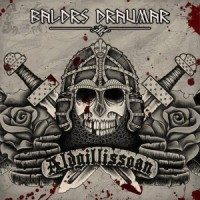 With so many amazing releases coming out this year, there seems to be too much music and not enough time for it all. My advice would be to stay awake a little longer and forego sleep, especially to check out the latest from Viking horde of Baldrs Draumar entitled “Aldgillissoan”. I am shocked that has been 4 years since the epic “Forfedres Fortellinger” came out, which is still in my rotation of “must listen to” Viking metal albums.
Hailing from Fryslân (a province in North of the Netherlands) Baldrs Draumar latest release, while still having some style similarities to “Forfedres Fortellinger”, has an even sharper edge now with decidedly heavier songs and a much better production. I think if you like King Of Asgard, Grimner or Skjaldborg, you should definitely be into Baldrs Draumar if you are not already. This is not one of those albums that you may need to listen to a couple of times to get into it….”Aldgillissoan” immediately has catchier, more recognizable tracks this time around and I feel that, as much as I love the old stuff, the new material is going to take them to another level. Tracks like “Hadagrims Fertriet” still have the “old” Baldrs Draumar feel to them but now they have a much heavier, straightforward Viking Metal sound in their arsenal, specifically on tracks like “Wolvetiid”, “In Skym Yn It Tsjuster” and album opener “Koppen Yn ‘E Mist” after the obligatory “Isenhiem” instrumental start.
There is less interlude parts as well, not as much spoken word parts and a mix of song lengths to keep it diverse and not monotonous. Being from the Netherlands, I am sure people will want a comparison to Heidevolk, but they really do not have a lot of similarities other than both being amazing musicians playing heavy folk/pagan/Viking music. Although not a huge departure from “Forfedres….” I think “Aldgillssoan” has a more accessible sound with crunchier metal songs that also benefit from a much heavier production this time around. So go grab your drinking horn, fill it with your favourite grog and take a listen to the latest from Baldrs Draumar, I have a feeling you will be repeating this process numerous times, great album.