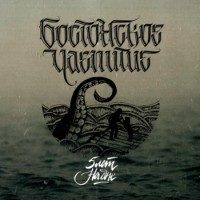 Bostonskoe Chaepitie are a Celtic Punk band from Minsk, Belarus (Geographically, think Russia) and all of their music is recorded in Belarusian. Having formed in 2009, they have released 2 albums, the first being split with and Belarusian Punk band named Zavulak Vinny Stigm’y. With the help of a friend of mine I was able to gather enough information to put together a passable review of their album ‘5 Let Na Dne’.

First off the name of the band Bostonskoe Chaepitie, translates into English as ‘Tea Time in Boston’ or ‘The Boston Tea Party’. The title of the album ‘5 Let Na Dne’ loosely translates to ‘5 Years on The Bottom’, referring to possibly the ocean. After listening to the album I think both the band name and title fit very well.

Bostonskoe Chaepitie are a 5 piece Folk Punk Band which, as previously mentioned is sung entirely in Belorussian. While I cannot understand a single lyric I find the release pretty enjoyable. It is composed and performed very well and I rather enjoy that it is banjo heavy and driven by some really excellent accordion playing. The songs all have a feel of sped up sea shanties and are sung mainly by the accordion player Masha.

Overall the release has a lot of passion ad skill behind it, but I sure would love to know what the Hell they are saying!!
The album is available is on Bandcamp (Name Your Price).