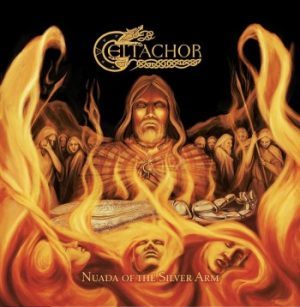 2014 was a banner year for folk/pagan/Viking metal from Ireland with releases from Primordial and Cruachan being in my personal top 5. Now in 2015, Celtachor are the first to offer something new from the Emerald Isle with “Nuada Of The Silver Arm”, their 2nd full length. Their first full length “Nine Waves From The Shore” was bleak (in a good way) in its telling of Irish mythology and lore thru their style of folk/black metal. “Nuada Of The Silver Arm” picks right up where that left off and has not lost any of the magic of the first album.
The comparison to a black metal/doomy/less folky version of Cruachan I think is relatively fair, although I think they sound a little like Immortal mixed with a little Grand Magus or doom legends Trouble as well. First off, a much needed improvement in production is readily apparent…. definitely more transparent and clearer, especially in the percussion department with better layering of instrumentation. Secondly, the songs just sound tighter then the first album and are more cohesive and less raw, but not to the point of losing its heaviness. Lastly, while the songs still have the mythological content like on “Nine Waves…”, the songs here are shorter across the board with an average time of around 5 minutes.
Usually, I like to hear songs get longer from a band as a sign of maturation. In Celtachor’s case, they were already writing 10 minute+ long songs from the start, so now they are able to refine what they are able to do in less time, which leads to songs more focused and brutal. Stephen certainly gets a workout in the vocal department, not only in the amount of lyrics but in vocal delivery. He commands lines loaded with legend and lore and with contribution of whistle in selected spots. Musically, there is nothing massively different style wise. Fionn and David crush riffs back and forth with new member Oliver on bass joining Anaïs on drums in the rhythm section…. really a continuation of the first album. Track for example like “King Eochaid’s Fall” and “Uaithne The Dagda’s Harp” have a mix of all the good things, acoustic/soft guitar, brutal riffs and pounding rhythm with whistle. This is a relatively short album (less than 40 minutes) but is still full of excellent material. The subject matter of the songs may be a little lofty for most, but maybe for those of you challenged by it, you should maybe pick up a book and do a little reading so you can enjoy the songs more instead of getting scared off. I, for one, am thankful that Celtachor writes material like this….
I embrace my Scottish heritage and listening to this reminds me of being back in the land of my forefathers. Celtachor merge my love of my homeland and black/folk metal (much like my beloved Saor) as good as anyone can…. great album