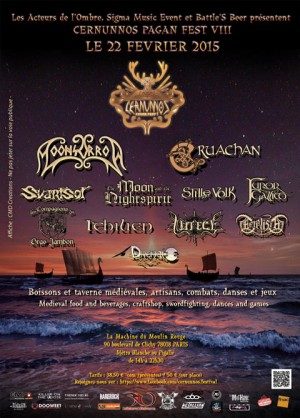 On a rainy weekend in February, Folk-metal.nl travels to France for the annual Parisian festival Cernunnos Paganfest. The 8th edition of the festival, that also happens to be a medieval fair, is held in the venue ‘La Machine du Moulin Rouge’. Outside of the venue, the audience is greeted by some pagan ladies in animal skin, and a horde of viking warriors trying to stop the passing cars, and scaring tourists with their barbaric screams.

The scene attracts a lot of attention from the tourists and locals in the area. Although the scene outside is very entertaining to watch, it is time to take a look inside of the venue. The venue is divided in two different halls; one for the main stage, and a hall for the smaller stage. Along the route to the stages, we find merchants selling jewelry, leather wares, Larp-weapons and many other things. Medieval dancing, music and games are part of the entertainment today, but the main reason we’re here is to check out all of the bands, time for some metal!

Lutece
The opening act for today is the French band Lutece. Although the band is not mentioned on the folk-metal.nl website, it is still worth mentioning here. Lutece makes pagan/black metal, with clear influences from bands such as Amon Amarth and Enslaved. Despite the band playing very early in the afternoon, the venue is already pretty crowded. The audience is still pretty tame, but the band manages to get some people to bang their heads to the songs. In my opinion, Lutece couldn’t have been a better opener for the day, because the songs are raw and up-tempo, and are diverse enough to stay interesting for a crowd that is yet to be fired up. The band put up a convincing performance, and made a great opener for a great day full of pagan, folk and black metal related music.
Score: 8,0 / 10

Drenaï
The first band to play on the smaller stage was the French band Drenaï. Despite leaving the main stage shortly after Lutece finished playing, we still missed the first songs due to large numbers of people walking through the narrow passages between the rooms. When we finally got to the smaller stage, a great number of people were dancing and partying all across the room. The band makes cheerful up-tempo folk metal tunes, which are perfect for an event such as Cernunnos Paganfest. Although the quality of the music isn’t all that great, and the keyboard parts are practically inaudible, the band still manages to put up a decent performance, and what they lack in quality the band more than makes up for with enthusiasm. The performance is rather short, but enough to get the audience fired up this early in the afternoon. All in all, not a bad performance by Drenaï!
Score: 7,0 / 10

Furor Gallico
One of the highlights of the evening was the celtic folk metal band Furor Gallico. The Italian company attracted a lot of audience at the main stage, which was surprising, as the band was the first international act of the evening. Despite the fact that the band has just released their new album titled ‘Songs from the earth’, the setlist was very diverse, and featured a lot of old work as well as new songs. The orchestration was truly beautiful, and the acoustics in the venue contributed greatly to this. All of the instruments were properly adjusted, and both the violin and harp created a dreamy atmosphere in all of the songs. It wasn’t just the instrumentation that was great however, the vocals were also a great addition to the performance. Vocalist Davide is responsible for both the grunts, growls and clean vocals of the band, which creates a nice variety in all of the songs. All in all, the band has given us a great performance, the crowd loved it, and people were fervently banging their head and moshing along to the songs. Definitely one of the best performances this evening!
Score: 9,0 / 10

Cerevisia
Due to the fact that we were so captivated by Furor Gallico that we wanted to see it through until the end, we missed almost the entire set by Cerevisia. The narrow venue made it almost impossible to go between the separate rooms, causing jams and hold-ups all across the venue. Nevertheless we squeezed our way through the mass to see Cerevisia for the last couple of songs. What we heard was a combination of folk and melodeath, creating a nice contrast between their songs. The music was pretty standard, nothing we haven’t heard before, but amusing nonetheless. The band had a great stage performance and the crowd was pretty enthusiastic. All in all a decent performance as far as we could tell!
Score: 7,0 / 10

Stille Volk
Up next is the French company ‘Stille Volk’. The band is without question the least metal of all the other acts today, but amusing nonetheless. Stille Volk makes (neo)folk inspired music, and easily combines modern elements with traditional folk metal instruments such as the hurdy-gurdy, lute, violin, bouzouki, bombarde and various flutes. The instrumentation is really good and well-contemplated, and the acoustics in the building really make all of the instruments stand out in their own way. The band is clearly a great crowd-pleaser, because the audience is loving it. Despite the fact that the band has a great stage performance, the music somehow lacks excitement. After about half an hour, the songs all start to sound the same, and we decide it is time to head over to the smaller stage to be on time for the next band. Definitely a great performance by Stille Volk, but unfortunately not our cup of tea.
Score: 7,5 / 10

Ithilien
If there is one band that we were very excited to see it is the Belgian band Ithilien. After releasing a great album, our expectations were very high. However, the band was probably the biggest disappointment of the day. The instrumentation was horrible, the keyboard was barely audible, the bagpipes sounded out of tune, and the music was reduced to a haze of drums and bass. The vocals weren’t all that good either. It’s a shame to see the band like this, because I really believe it could have been much better if the instrumentation was better. The songs in itself were pretty cool, but unfortunately the implementation wasn’t. We didn’t stay to see the entire performance because of the bad quality, so we left early to find ourselves a proper spot for Svartsot in the main hall.
Score: 6,0 / 10

Svartsot
If there is one band that is always guaranteed for a party, it has to be Svartsot. The Danish band is about to release its new studio album titled ‘Vældet’. Although the album isn’t released yet, the band is already selling it at their merchandise stand. All the more reason for us to be excited for the show! As we have come to expect from the band, Svartsot treats us to a great dose of pagan folk-metal that has the audience jumping and bouncing around the room in no time. The band shows a great stage performance, and the interaction with the audience couldn’t have been better. The instrumentation might not have been top-notch, but both the instruments and vocals were finely tuned. It is always a pleasure to see these guys live on stage. The band managed to turn the venue into a complete chaos in a couple of minutes. The cheerful tunes and raw musical violence managed to motivate the entire audience. It was a shame the performance was so short, because we would have loved to see more of these guys!
Score: 8,5 / 10

Cruachan
I’m always a little skeptical when it comes to Cruachan. One the one hand, the band has always surprised me with fantastic live performances, but on the other hand the quality of their album releases isn’t all that great and somehow always sounds a little sloppy. Nevertheless, I am excited to finally see the band live on stage again. Cruachan is hard to describe in terms of genre, since it balances somewhere between black and folk metal. However, this always makes for varied setlist, as is the case today. The band starts off with some typical up-tempo folk metal songs, followed by some of the more raw and violent songs. Halfway through the set guest-vocalist Rachel joins the stage, and we are being treated to a wonderful rendition of ‘Ride On’. From here on out, the madness begins, and the rest of the set has the audience fervently clapping and singing along. Once again the band proves that they have wonderful stage performance. Well done!
Score: 8,5 / 10

Moonsorrow
By far the most anticipated band of the evening was the Finnish company of Moonsorrow. It has been a while since we last saw them live on stage, so our expectations were pretty high. The band that was founded in 1995 has developed a sound of their own, which makes them stand out among the large numbers of folk metal bands these days. Moonsorrow has a very melancholic and vivacious sound, that creates a wonderful atmosphere and carries you away when listening to it. This was also what happened today. As soon as the band started playing, the entire audience was awestruck, and went silent almost instantly. Most people had their eyes closed, silently drifting away on the wonderful melodies that followed. The instrumentation and stage performance was nothing far from perfect. Moonsorrow managed to create a warm and dreamy haze, that lifted once the band stopped playing and the audience went wild with applause. The only reason why these guys don’t get the full amount of points is because vocalist Ville Sorvali seemed to have lost his voice. The vocals weren’t bad, but they weren’t great either. However, this hasn’t affected the performance in one bit. Simply brilliant!!
Score: 9,5 / 10