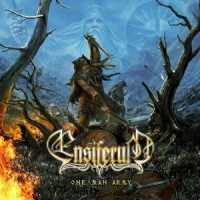 The Finnish band Ensiferum needs no introduction. The band that has toured with folk metal giants worldwide releases its sixth studio album to date. The release of ‘Unsung Heroes’ back in 2012 clearly showed a style-switch that was also present on the ‘From Afar’ album. Despite the varied responses to the album the band has picked up the pace again, and released ‘One Man Army’ under a new label. Time for a new Ensiferum era!

The album starts with a typical Ensiferum intro, epic and steadily working towards the next track. ‘Axe of Judgment’ is a nice up tempo song that is very typical for Ensiferum. The tempo drops a little with ‘Heathen Horde’, but with its easy pace and clean intermezzo’s this song is ideal for an Ensiferum set, and will probably have the audience sing along in no time. It has to be said that the first half of the new album sounds a lot more vivacious in comparison to Unsung Heroes, and at times reminds me of the From Afar album. So far the album sounds good, not surprisingly good, but easy to listen to nonetheless. The song on the album that stands out the most has to be ‘Warrior without a War’ halfway through the album. The song has a nice mid-tempo pace accompanied by a choir that really make the song stand out among the other songs on the album. Petri’s raw vocals are interspersed with clean intermezzo’s and a choir in the background, that create an epic and heroic atmosphere. This epic song flows into the next track of the album titled ‘Cry for The Earth Bounds’ that once again features the choir throughout the course of the song. Moving on towards the other half of the album, we continue with ‘Two of Spades’. Compared to the rest of the album this song stands out both in terms of orchestration and lyrics. Somewhere halfway through the song we hear a disco tune accompanied by a banjo and part of what seems to be nothing less than ‘The Wall’ by Pink Floyd. This song might have worked as a bonus track, but is totally misplaced in my opinion. The album slowly moves on to ‘My Ancestor’s Blood’ which is a strange contradiction to the previous song. I cannot help but notice that the coherence of the album is very messy and the songs don’t really seem to fit well together. Pity, because the album sure has potential. The 11 minute lasting song ‘Descendants, Defiance, Domination’ is a great song to end the album with, but once again lacks the excitement from previous albums. The song would have been a fitting ending for the album, but we still have one more song to go. ‘Neito Pohjolan’ is a modest song that features female guest vocals from none other than ex-Turisas member Netto Skog. Once again, the song isn’t bad, but doesn’t add up to the songs already on the album. With a play time of 53 we reach the end of this very diverse album.

In summary, One Man Army is not a bad album, but it isn’t extraordinarily good either. The album is a lot more varied than its predecessor Unsung Heroes, but the songs lack excitement and easily pass you by. I cannot shake the feeling that Ensiferum could have done a lot more with the new album. I’m hoping the band will go back to its roots and release more albums like Victory Songs, but I’m afraid that is just wishful thinking. Personally I’m not a big fan of the new style switch, but I’m sure there are plenty of fans out there who can appreciate the new album more than I do.