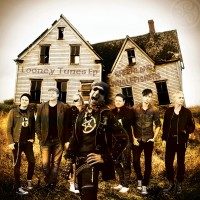 The Norwegian Greenland Whalefishers started way back in 1994 with blending punk and Celtic Folk. They celebrated their 20th anniversary last year, but this year they’ll move on with a new studio album. And it has been a long time since we got such a thing from the Whalefishers. The previous studio-album dates back to 2010. And despite the fact the best way to experience Celtic Punk is live, it’s also nice to get something new every now and then.
To ease the wait, they release an EP on St. Patricks day. On this EP, you’ll find three tracks.
And you’ll find all the trademarks of these Norwegians in these 3 songs. There are these nice and merry whistles in the title track Looney Tunes, a lot of melancholy in Afraid and a nice up-tempo in 20 Years of Waiting. And in all song punklyrics, critical, and giving you something to think about.
These Norwegian succeeded again and delivered an intriguing EP, which makes me curious. What will their new album bring us, for the time being I can quench my thirst with this EP.