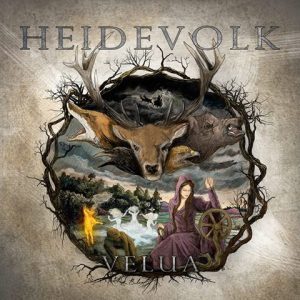 I would have to say that the album I was looking forward to the most in 2015 is the latest from Heidevolk. After the release of “Batavi” in 2012, co-vocalist Joris left in 2013 and was replaced by Lars, so the anticipation of hearing remaining co-vocalist Mark with Lars has been extremely high. Would they sound different with Lars now in the band? Let me put your fears aside immediately as Mark and Lars have become, once again, the 2 halves of the same whole that create the unique Heidevolk vocal sound rather seamlessly, to the point where it is not Mark and Lars singing but becomes like a 3rd person altogether. Lars has a very similar tone in his voice to Joris and the blending with Mark’s vocals remains the keystone to the one-of-a-kind Heidevolk sound. While “Batavi” was, as always, a quality release from Heidevolk, I don’t know if the concept album worked as well for me as I felt it very limiting in terms of style and subject matter. “Velua”, on the other hand, hits the mark in a huge way with tracks that are based on tales, stories and images from their native Netherlands.
This album has created something for the listener,as hard as this may be to believe. Its “heaviness” is in the fact that it is not trying to be “heavy” and as a result, they have crafted a beautiful and harmonious release. The smooth overall sound of “Velua” creates a mood to it that becomes more uplifting and fulfilling with every listen. There are no parlor tricks or frills to distract from the feel and while the songs are still metal for sure, Reamon and Kevin (Guitars) Rowan (Bass) and Joost (drums) collectively have written tracks here that really transcend a metal album with feeling, passion and honesty that rivals music in any genre.
While most bands strive to write technically difficult material to make it heavy, Heidevolk has made an album that is heavy by sinking into your soul with its simpler approach. With additional instrumentation as well, they are doing what really matters… writing songs that strike a chord and resonate far after the music is over. From opening track “Winter Woede”, Heidevolk set the tone for the album and create a journey to the Netherlands thru song like no other. As if this album isn’t amazing enough, it closes with “Vinland”, a tribute to the western lands sung in English (!) and will hopefully be a staple of their upcoming live set, and is probably a track most reminiscent to previous songs. An amazing triumph of an album which shows their growth and maturity in forging their own path for all of us to find, Heidevolk has just shown with “Velua” that they are in tune with themselves as artists as well as being one with their native land…