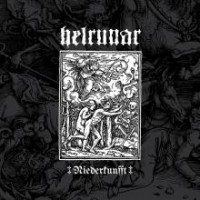 After a long 4 years since the release “Sól” and almost 2 years since the split Arstidir Lifsins, Helrunar have finally emerged from the darkness with a new full length entitled “Niederkunfft”. To say that Helrunar is prolific would be a huge understatement…a couple of splits and now 4 full length albums under their belts is a gigantic achievement, particularly when everything they have released has delivered the goods. With this latest release, they continue in the Helrunar tradition of black/pagan metal that is always quality from beginning to end.
The Helrunar philosophy I reckon seems simple, spine crushing riffs with equally destructive vocals and percussion patterns. I had such a revelation listening to this…. almost a channeling of old Black Sabbath/Slayer mixed with Satyricon/Mayhem with a contemporary feel really hit me as the essence of this release.
Alsvartr really knows his way around a riff and when to let it loose and when to restrain it. The synergy between Alsvartr (All Music) and Skald Draugir (Vocals) really are like two halves of the same whole…both complimenting each other’s roles in the final product here. I find this to be a very accessible release…not commercial by any means but will not scare off the average metal listener looking for something heavier to try out. Most tracks are around the 6 minute mark or so average time, which is plenty to create the somber mood that only Helrunar can. The word “Dirge” could not be more appropriate here in describing the tracks. Songs like “Totentanz” and “Die Kirch Ist Umgekehret” will have you waiting in anticipation for the executioner’s axe to fall, every second like an eternity spent in fear of your life. Production is appropriate with nothing over the top, but with enough detail and separation that it is natural and not stuffy/compressed.
This may be the release that garners Helrunar more widespread attention that they so rightfully deserve. If the Dark Ages needed a soundtrack, the Helrunar catalog would be perfect for the task, especially when everyone was dying from the Plague. Helrunar have once again issued another in a long string of amazing albums, now keep listening while you step over the dead bodies…