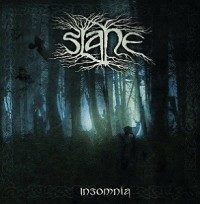 Celtic Metal from Russia? I’m always curious what’s behind these kind of bands. Celtic Metal, is just like the celts, spread across a wide territory, with it’s own rites and tribes. From Japan to Argentina, and as it seems now they’re in Russia too.
The band Slane has, like many others struggled for a solid line-up for a few years, even to the point where Alexander Kuzmin (founder of the band) was alone and did everything himself, sometimes. In 2013 they finally found a steady line-up, so now it’s time for the first song to be reviewed.

Insomnia, I don’t know why that title is Celtic, the lyrics might tell but I can’t understand nor find them. The fact that I can’t understand them is a good thing, they’re in English as far as I can make up. But just grunted so brutal that I have no clue what they say, I like this. The song itself is a midtempo song with pretty easy guitar parts, throwing its full weight on the flutes, bagpipes and vocals. It sounds pretty fun and since I’m a big bagpipe fan I actually like this, but the quality of the mix is pretty bad. Also the tune of the bagpipe is a bit too sharp, something pretty tough with a bagpipe, so next time, I hope it’s kept down a little. A little mistake in the end of the song makes sure it’s a band just starting something. The outro with only flute and some awesome drumwork is pretty awesome though. I hope the band goes on and might be able to record some better material in the future. There’s really some potential over here and it all sounds quite cool, but the recording and mastering is really letting the band down on this one. So, I’m very curious what they can do with a proper budget, hopefully they can find it.