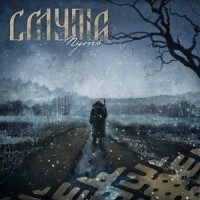 There is only one question that comes to mind… how is Russia’s Smuta not bigger than they currently are? 4 quality full lengths over an 11+ year career should allow for much more recognition than they seemingly receive. By all appearances they should be touring internationally constantly with such an incredible catalog of music to choose from, well, hopefully with the release of “The Way”, Smuta will finally break thru to the next level and change all of that.
I think the songwriting on this latest release is more focused and heavier for sure, definitely less on the “folk” and more on the “metal” side of things. With Smuta, there will always be constants, growled lead vocals, beautiful female vocals with flute/keyboards and mid paced pagan metal guitar, bass and drums.
Album opener “Life Path” sets the tone for the album with a sound reminiscent to Equilibrium or Eluveitie I suppose but with more of a pagan/Russian style with a touch of folk to their overall sound. The songs average around 4 minutes in length so nothing is overworked and I think this makes for an enjoyable listen. Tracks like “To Revenge” and the aptly named “Death” get really dark quickly but still are pretty accessible again considering they seemingly have gotten heavier with more of an edge.
This will, I hope, garner them some more attention. The production is appropriate for the release highlighting Maria’s vocals and flute playing against Evgeny’s growls. The rest of the band (Khorsuz-Guitar, Yevgeny-Drums, Oleg-Bass and Alyona-keyboards) all play their roles with the right amount of musicianship and knowing where everyone fits together. For those not familiar with Smuta, now is the time to check them out as I believe “The Way” is the start of a brighter future for them, a future of recognition that is way past due to them. Once you listen, you will then be able to go back and get their catalog to hear how they have progressed to this point… good album.