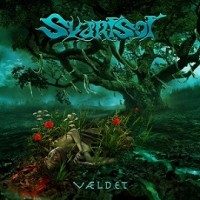 The bearded Danes called Svartsot prepared more music for rape and pillage, this time they called it Vældet which means overwhelmed.
It has been a few years since their last record Maledictus Eris (2011) and since this is one of my favourite folk-metal albums, I have quite some expectations. Known for their violent and coarse music and brute growls, combined with happy cheerful tunes, flutes and bagpipes, these men are up for quite some good raidings and also for the parties afterwards.

Midsommer, kicking of. Folky as know, but soon it’s time for some headbanging. Their lyrics are in Danish as usual, but even if you master the language I doubt anyone can understand what Thor is growling. A catchy tune, giving me difficulties to sit still. Still a big fan of the use of the bagpipes by Svartsot.
With Vældet, Svartsot returns more to their albums Mulmets Viser and Ravnenes Saga, more towards the Viking sound, as Maledictus Eris had more late Medieval influences.

The second song, Urtekonen is definitely fighting it’s way trough, awesome up-tempo song, a lot of headbanging riffs.
Kilden, a song I’ve heard live too recently, is making place for some clean background vocals. This is something new for Svartsot (the only clean vocals so far said “Hey!”). Of course they had one acoustic song called Spigrene on their last album with clean vocals, but using it in this full metal song is something new. Pretty awesome too!
Markedstid, a song about how to get fucking wasted, one big epic party. The most cheerful song of the record, because a folk-metal album can’t go without a drinking song, especially not Svartsot.

The last song is called Ved Vældets Vande which means something like By Overwhelming Waters. I personally think the record would’ve been better without this song. It’s actually pretty awesome, but than in the middle suddenly, female vocals. You drunken Danes! Why?

But I must say, Svartsot has done it again. Fine piece of work and I’m definitely looking forward to see you guys again this summer.