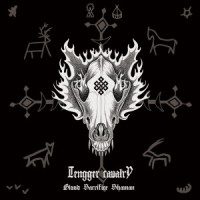 The mighty Tengger Calvary has returned with another new full length (of sorts) with “Blood Sacrifice Shaman”. When I say “of sorts” I mean it will be new to most of us as “Blood Sacrifice Shaman” was originally released in 2010 but had very limited distribution in China. Since then, they have released 5 (!) full lengths and decided, luckily for us, to re-record and re-issue songs from the first full length. Although not exact track for track, what is great here is they have chosen a few songs to redo and mixed in newer tracks as well. First off, sound wise, there is no question that they have a deep connection to their Asian roots (they consider themselves “Mongolian Folk Metal”) and their integration of traditional instrumentation is apparent in every track; most notably the horse head fiddle. While a band like Nine Treasures also uses the horse head fiddle, they use it differently here…..definitely a darker, more mystical mood to it as opposed to Nine Treasures sound having more of an upbeat/humppa style to it. Tengger Calvary sounds to me like if Korpiklaani got lost in the Himalayas and were rescued by the Gyuto monks and decided to make music together….it has both the folk metal sound to it along with the deeply ritualistic chanting and tantric essence to it. It is obviously more accessible than that combination may sound, tracks like “Tengger Calvary”, “Horseman” and “Hero” are catchy and heavy. 5 albums in, there definitely has been progression in the Tengger Calvary sound although I don’t think this would necessarily be the album I would recommend to someone who has not heard them before…. more likely previous albums like “The Expedition” or “Ancient Call” would be the ones I would recommend as I feel they are more accessible with more memorable tracks. I don’t know if this particular release has the story or ideas behind it as other releases have…it seems like these are tracks they wanted to get out for everyone to hear and some extras as well…..more like a compilation than a traditional album. “Blood Sacrifice Shaman” is another great chapter in the Tengger Calvary story and helps fill in the gaps to their extremely prolific history thus far.
I think it is definitely worth checking out, especially to hear the progression they have made in such a short amount of time……