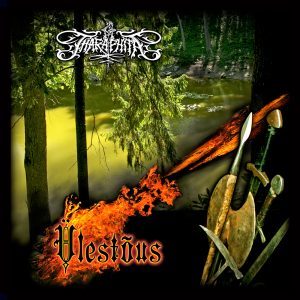 Estonia’s Tharaphita have been relatively quiet of late, but have returned in a big way with “Ülestõus”, their first release of any kind in seemingly 6 years or so. I would categorize them sound wise maybe to more Viking metal acts like Månegarm, Skjaldborg or King Of Asgard and maybe even a little of my recently reviewed Thormesis or old Satyricon….. with 5 members and no keyboards or traditional instrumentation, they definitely have a Pagan/Viking sound going on.
This is another band that boggles the mind, these guys should be huge and playing internationally or at least a festival here or there, but fame has eluded their grasp. I can only assume the 6 year hibernation is a major part of the reason why. This is an album that you can instantly get into, with catchy mid paced songs right from the beginning of the title track “Ülestõus” (“Uprising”) to album closer (which I can’t stop listening to….that killer bass part!!) “Terasest Taotud Teel” (“On A Road Forged Of Steel”). Songs range in length from 4-6 minutes or so, perfect for enough riffage and metal to soothe the savage beast in us all. Front man Ank has a controlled fury to his voice, never over reaching for notes that are not needed. Musically, the songs chug along with Benton and Draconic on guitar, Brutalis on bass and Melu on drums creating a tapestry woven with a crunchy foundation without a lot of acrobatics, but their musicianship is readily apparent. Riffs tend to be very similar from song to song, but if you right one good riff then variations of that are good too. For those that maybe haven’t gravitated towards Metsatöll (Estonia’s possible leading folk metal export) for one reason or another, but are intrigued by Estonian culture and history, especially the darker side, then Tharaphita is the band to check out.
The production is nice here, with a nice separation of instrumentation in the mix and clean yet still necessarily distorted guitar. Again I am mystified why they are not bigger than they are. I can only assume that they have been holding themselves back just to get ready to pounce at the right moment. 2015 seems to be the time for Tharaphita to unleash their special blend of black, pagan metal onto the unsuspecting masses. You have been warned…