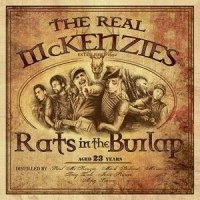 There are not many bands in the Celtic Punk genre that work as hard or have the staying power of The Real McKenzies. In the three years since releasing their album “Westwinds”, they have kept a very busy touring schedule.
In early 2014, I heard a new album was being written and I could not wait to hear it! Fast forward to March 2015 and The Real McKenzies’ 11th studio album “Rats in the Burlap” has arrived. Since 1995, the band has been turning out incredible music and in these past 20 years they have entrenched themselves unquestionably as one of the best Celtic Punk bands in the world.
This album sees the return of Gord Taylor to the bagpipes and to help out with songwriting duties – in fact a song off his solo album “Up On a Motorbike” appears on it. This album shows the dynamic range The Real McKenzies are capable of, from the swanky “Bootsy the Haggis-Eating Cat” to their ever-present, foot-stomping, bagpipe driven anthems such as “Midnight Train to Moscow”.
“Rats in the Burlap” bring us an incredibly tight line-up and quite possibly their best album to date! After 20 years this album is about what any fan would expect – a wicked handful of arse kicking tunes to fill your earholes with.
If bagpipe heavy, booze driven, Canadian Celtic Punk is your jug o’ punch, then “Rats in The Burlap” by the The Real McKenzies will leave you reeling and craving more!