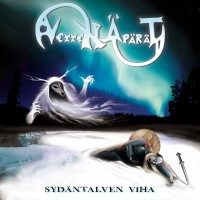 A Finnish folkmetal band that had trouble completing their line-up for years. After 7 years of struggle they finally are able to release a first single called Midwinter anger, or in Finnish, Sydaentalven Viha.

Of course a keyboard intro with a nice folky acoustic guitar tune starts this single. Joining in also pretty good clean vocals. I have no idea what this man tries to tell us since the lyrics are all in Finnish. The song really kicks of with electric guitars and drums after one minute of peace. So the Midwinter Anger begins. The vocals stay clean for the first while and it all sounds pretty good. Also the mixing is of pretty good quality. After another minute the song speeds up and we hear some grunts. Violent roaring with yelling vocals in the background.
The keyboards have a pretty great influence on the sound of this band but they’re not the annoying keyboard tunes we’ve heard way too often. And even though the music isn’t anything new or refreshing, it’s a decent start for these guys. The song takes 7:42 which is quite long, but sometimes I get the feeling they tried to force everything they can into one song. I’m curious what it would sound like when they make an entire album, which might give them some more time to give their wide range of elements the right place in stead of rushing through with them.

A promising first single, not something really special, but for a first release I say job well done!