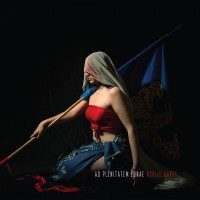 For those of you who were all over the debut from Ad Plenitatem Lunae (like everyone seemingly here at the site) you are in luck as they are now teasing you with a single entitled “Acuile Uarbe”. Now, I was not very familiar with them other than that their debut album was “debut of the year” in 2012 on the site. I do get a little bit of a chill when I hear a band described as being “Medieval” as this conjures up not much in the way of metal and overly dramatic, maybe not taken too seriously acoustic basedmusic….not necessarily a bad thing, but images of the local Renaissance Faire come to mind. Luckily, I had the chance to hear the first album prior to the single and am I glad that I did. While “Tempus Non Est Locundum” is rooted in a Renaissance-era style, especially being sung in Friulian (language based in NE Italy) it has enough contemporary and almost nu-metal catchiness to it that I see why everyone loved this debut…. chock full of bagpipes, keys, hooky riffs, layered vocals….reminded me a lot of bands like Skiltron and Mago De Oz for sure. “Acuile Uarbe” is a lot of what was on the album so no worries that they changed their style, although I think production is not as lively on this song as it sounded a little compressed or flat, especially the guitar sound. However, the song still hits all the notes necessary to be a worthy harbinger of a new album coming soon. At 4 minues or so, there is not a lot to get excited about here…it is a good song and I wish maybe they had put a few more together and made an EP out of it or something instead of just the one song. Oh well….”beggars can’t be choosers” as they say…I guess we will need to just wait until the album comes out….hopefully soon!!