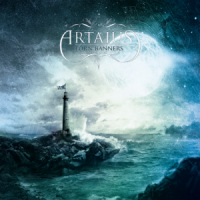 Artaius is back with an album ‘Torn Banners’, the sequel of their début-album ‘The Fifth Season’. And in this seventh season of their existence, the band takes off, where they left us two years ago with their debut. ‘Seven Months’ could just as easily have been another track from their first album.
We still get this mix of all kind of styles, not only the obvious folk, but the gothic elements and the jazzy/proggy elements, make this an unique blend.
The prog-elements have become sufficiently stronger, and this is the only thing I have a bit of a problem with on this album. I’m just an old-fashioned guy, who’s very fond of the traditional stuff. So, the clash of the proggy sound with the quite traditional folk, bother me a bit, but that’s just me.
This choice of music is very brave, and with this choice Artaius proves ones more that folk-metal isn’t dead at all. There are still ways to explore, even with their choice of Celtic folk-tunes, there are still unexploited fields and forests of music to explore.
Their musical search for unexplored terrain culminates in ‘Pearls of Suffering’, where brutal male vocals, clean female vocals meet. Solid guitars, mixed with flutes, which remind me of the 70’s with the Dutch band Focus. Ultimate proggy key-work, alternated with pieces of raw metal. You simply can’t describe a song like this.

‘Torn Banners’ is an album which lies perfectly in line with their début-album. Without changing their unique brand, Artaius has developed their style and created another very nice album. I think the proggy-keys are a little bit over the top, but I have to admit it gives the music a very unique taste. ‘Torn Banners’ is a very nice album, which deserves your ear, because you should try this twist of folk-metal.