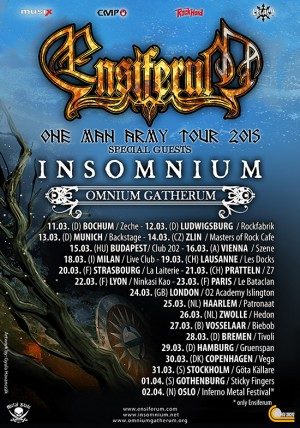 Tonight we travel to Zwolle for a very special concert featuring some of our favorite bands from Finland, the Ensiferum, Insomnium and Omnium Gatherum concert! Long have we anticipated this concert, and as we approach the venue I cannot help but wonder what we will find inside. After all, tonight’s lineup is a curious one indeed. The epic pagan folk metal tunes from Ensiferum will be accompanied by the melancholic melodic death metal from both Omnium Gatherum and Insomnium, something that will surely attract a very diverse audience. Time to head inside and see what Finnish metal is all about!

Omnium Gatherum
The first band of tonight is the Finnish melodic death metal band Omnium Gatherum. Despite the venue still being half-empty, these guys already know how to get the crowd along. The sympathetic front man Jukka Pelkonen had great interaction with the crowd and really managed to set the mood for tonight. Despite the enthusiasm of the band however, the sound seemed to be a bit off during the first half of the set. The music sounded empty and somehow lacked the fire it usually has. Guitarist Markus Vanhala also made a lot of mistakes during the songs, which really killed the mood for Omnium Gatherum. This got better after the first half of the set however, so it wasn’t an entire mood kill. The setlist was great however, and the band really gave it their all. I couldn’t help but notice that the band has mostly played songs from their last two albums ‘Beyond’ and ‘New World Shadows’ in their relatively short set. The audience, however, seemed to like it just fine. Unfortunately the band wasn’t as convincing live as they usually are, but it was a good performance nonetheless. Pity, because the show sure looked promising!
Score: 7,0/10

Insomnium
The second band of tonight is once again a melodic death metal band from Finland, known as none other than Insomnium. The band that released its 6th full length album last year has grown a lot in popularity lately. It is their second European tour in a relatively short time, seeing how they were on tour with Fleshgod Apocalypse and Stam1na at the end of 2014. Fortunately for the band, the venue is already pretty packed once the band starts playing. As we have come to expect from Insomnium, the set kicks off with a nice bombastic song from the new album, and generally works its way to a softer pace somewhere halfway down he set. Guitarist Ville Friman isn’t present tonight, but the band has found a temporary replacement in Kari Ollo, who also sings the clean vocals during tonight’s set. And as much as I love Ville’s somewhat raw and imperfect vocals, Ollo manages to give one hell of a performance. The mistakes that Markus Vanhala made during the Omnium Gatherum show seemed to have disappeared during the Insomnium show, great performance! The atmosphere of tonight’s’ set is magical, something I have been fortunate to witness many times before. The set list is very diverse and features both old and new songs, which create a nice atmosphere in the venue. People are already moshing and banging their heads to the music, a great warm up for the Ensiferum show later this evening! It’s too bad the set is over so soon, because I would have loved to see more of this band. But now it’s time for the main dish as Ensiferum finally enters the stage!
Score: 9,5/10

Ensiferum
It has been quite some time since I last saw Ensiferum live on stage, but one thing is for certain, these guys never cease to impress. After the release of their mediocre album ‘One Man Army’ I was afraid the band had seen its best days, after all I was skeptical about the album ‘Unsung Heroes’ as well. Fortunately the band managed to prove me wrong tonight, because Ensiferum is always guaranteed to give one hell of a live performance. One of the big surprises of the evening is the guest appearance of ex-Turisas member Netta Skog, who will play the entire set on accordion. The set kicked off with two songs from the new album ‘Axe of Judgement’, shortly followed by ‘Heathen Horde’. Personally I am not a big fan of either of these songs, but they seemed to do better live than on cd and had the audience singing along in no time. The first two songs were followed up by some of the older work, as ‘Into Battle’ was the third song on the set list tonight. This song really takes me back to the time I started listening to Ensiferum, and with my fist held high I could not stop myself from singing along with the crowd. As expected, the song ‘Two of Spades’ from the new album was played at the beginning of the set. A couple of years ago I might have been a sucker for songs such as these, but now I just think it’s a ridiculous addition to the repertoire. This silly disco tune hardly represents the music by the fierce warriors that are Ensiferum, but the crowd seemed to like it just fine. I would have loved to hear some more stuff from the older albums, but it’s a tour for the new album after all. After a couple more songs from the new album we were treated to some of the work from Unsung Heroes. The title track was followed by ‘Burning Leaves’ which really got the tempo of the set down a little. It was a nice addition halfway through the set and worked towards one of the most anticipated songs of the evening, ‘Victory Songs’. With victory songs the crowd literally went wild with enthusiasm, it was great to see that the old stuff from the band is still being appreciated like this! As expected, victory songs was the last song of the set before the encore, which was introduced with a cover of Judas Priests’ ‘Breaking the Law’, sung by none other than Netta Skog. It was fun to see how all of the band members switched instruments, as Ensiferum concerts are commonly known for stunts like these. After the jollity of the Judas Priest cover the set was nearing its end, but fortunately the band would stay around just a little bit longer to treat the audience to ‘From Afar’ and ‘Iron’, two songs worthy of ending this fun and energetic evening. Any doubts about the band I may have had before this concert are long gone. Personally I’m not a big fan of the new direction the band is heading, but these guys know how to deliver every single time I see them live. The set list was varied and had a lot of surprises, both sound and lights were great and were a real addition to the show and the band managed to put up a great live performance. Ensiferum has proved once more that they are still worthy of being called one of the leaders of folk metal!
Score: 9,0/10