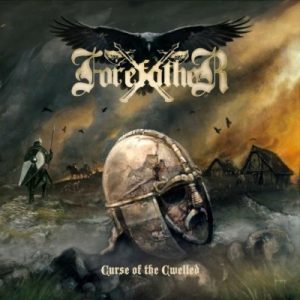 They say there are only a few guarantees in life….death and taxes. I would probably say that whoever came up with never heard Forefather or they would add them to that list as well. They are as “automatic” as the tides, the rising sun and waning moon with probably one of the most instantly recognizable sounds/styles in all of metal. I was a little worried that there had been 4 year layoff since “Last Of The Line” in 2011 but the time away has brought Forefather back with a renewed vigor and another classic album with “Curse Of The Cwelled” and thankfully, no major deviations in style change or quality. Now, they have not changed too much, but they have also not become stagnant remaining in a certain realm for so long and becoming a parody of themselves.
Seven albums in and they still can write the most consistently epic battle, history, bloodshed, medieval, mystical metal tracks around without a misstep in the bunch. From the killer album cover to the lyrics, Forefather has put it all together on this one. From opening head splitting track “Havoc On Holy Island” to the beautiful instrumental album closer “The River-Maid’s Farewell”, “Curse Of The Cwelled” is all you need to get your blood thirst on, ready for the next war to come around so you can sharpen your axe. There are few more mid-paced tracks on this one which helps create more of a mood than previous efforts, like a mist shrouded field after a recent conflict with bodies strewn about. Plus the fact that it is still the same two members (Athelstan and Wulfstan) and only them makes it that much more impressive. The ideas never die on the vine or make a style change necessary, every song still seems fresh and not reheated from previous efforts. I cannot get enough of Wulfstan’s vocals from the grim and battle weary to the clean and triumphant, it all works flawlessly especially in tracks like “Awakened Hate” and “By My Lord I Will Lie”.
If I had one criticism is that sometimes the songs may end too abruptly and maybe they should fade the song out instead but I mean if that is biggest criticism I can come up with then you know that this is another quality release. Production is also nice and smooth all around from the instrumentation to the vocals…no flashy tricks just the thunderstorm that is Forefather. With the seeming demise of Immortal (probably the closest band I can think of comparison wise), Forefather remain one of the stalwarts of epic battle black/pagan/viking metal or whatever sub-genre they are…..now if they only could get a touring lineup together and play some shows…one can dream, can’t they?? Another classic album by Forefather….