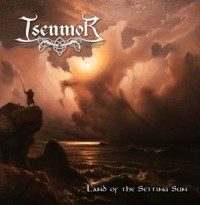 Right after my first review of an American band in 2015 (the epic new album from Wilderun) we now have the opportunity to review the first EP from Isenmor from Maryland with their first EP “Land Of The Setting Sun”. The EP features 5 songs…two which were released previously (“So Willingly Deceived” and “Death Is A Fine Companion”) and 3 presumably newer tracks I have not heard before. Well, I feel sorry for all of you since you won’t get to hear this folk laden release until it’s June 21st release date and by that point I will have probably burned myself out listening to it. Style wise, they remind me of a cross between a few other American bands…. Winterhymn plus maybe a little Æther Realm and Throne Of Wilderness and a dash of Alestorm, a delicious mix. With folk metal going off on so many tangents, Isenmor don’t stray far from the traditional folk metal path…. especially by guaranteeing it with not one, but two violinists Miles and Nick (who also doubles on Mandolin as well as vocals). The one word I keep going back to is “traditional” when describing and listening to Isenmor, the songs are very reminiscent of old drinking or whaling songs but still metal and not as “sing-songy”. With violin being at the forefront, you can’t help being transported back to the Tavern. “Death….” And “So….” have been updated to mix in better with slight alterations in arrangement and fit in nicely and sound seamless with the new material. New tracks (“Pyre” “Land Of The Setting Sun” and EP closer and soon to be crowd participation favourite “The Old Mead Hall”) are the highlights here for me as there has been definite growth in songwriting with a maturity and willingness to try a few different things out…specifically more layering of instrumentation and vocals.
Tim (Vocalist and Guitarist) leads the crew thru the churning waters adeptly trading vocals with Mike (Bass) and Jon (Keys) while drummer BG holds down the beat without being flashy. This has better sound then most initial offerings, but I can’t say it captures the liveliness or rather, the potential of how this could sound but being self-released it is a noble effort…. it is a little rough around the edges but the tracks shine thru nonetheless. Need a soundtrack for your next trip down to the wharf while looking for grog, a wench and a good ol’ bar fight? Isenmor is you ticket for sure…… great release