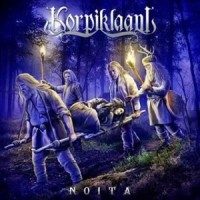 It has been awfully quiet around the Finnish folk metal band Korpiklaani the last couple of years. For a band that has released an album almost yearly it was a surprise to see that ‘Noita’ was scheduled to be released three years after the release of ‘Manala’ in 2012. This delay raised a lot of questions about the direction the band would be heading in with their ninth studio album. After all, the murderous pace in which the albums were released has not always been beneficial for the band. This change in direction was clearly audible on Manala, time to see if the band continues this line on the new album Noita.

The album literally kicks off with a typical humppa song from Korpiklaani. ‘Viinamäen Mies’ sounds very cheerful and up-tempo and is everything you would expect from a Korpiklaani song. No intro or song that builds up tension, but a straightforward party song that immediately sets the tone for the album. The relatively short song is followed by ‘Pilli on Pajusta Tehty’ that vaguely reminds me of Equilibrium’s ‘Met’. With both aforementioned songs it instantly becomes clear that both the violin and the accordion are more prominent on the new album in comparison to most of the older work. The pace of the first two songs is lowered by the third song on the album called ‘Lempo’, which sounds a lot more serious in terms of a Korpiklaani song. This change in pace is something that the band has experimented with on Manala as well. The song is once again based on Finnish folklore from the Kalevala, something we have come to expect from the band. Jonne Järvelä’s raw and somewhat scraggly vocals are without doubt what makes this song stand out on its own, but it is hardly a song that will stick in your head for a long time. With ‘Sahti’ the pace picks up again, but not in the best terms. After only four tracks I already feel like the album rushes over you like a chaotic whirlwind, and this feeling is only strengthened more and more as the album continues. ‘Luontoni’ is a typical Korpiklaani song, but like all songs before, fails to leave an impression and sounds exactly like all the other songs I’ve heard so far. With ‘Minä Näin Vedessä Neidon’ the pace drops again, which is a smart and appreciated diversion on the album. Especially the violin stands out well in this song, and really manages to create a somewhat dark and melancholic sound. So far I would say that this song is the one that has managed to captivate me the most. The biggest surprise on the album is without doubt ‘Jouni Jouni’, which is a hilarious cover of Billy Idol’s ‘Mony Mony’, and really ads up on the mischief from previous albums. ‘Kylästä Keväinen Kehto’ continues in the same fashion of the rest of the album, Finnish humppa combined with heavy guitars and furious drums that work towards the end of the album. Compared to ‘Ukon Wacka’ (2011) and ‘Manala’ (2012) the focus of Noita seems to be a more metal-like approach, but the overall mix and balance of the album is pretty decent.

Even though Noita has become a decent album I still believe that the band has long passed its expiration date. The murderous pace in which the band releases albums has not been beneficial for the quality of said albums, and even after three years the band still hasn’t managed to surprise or captivate me as much as it did with Karkelo and all the previous albums. Noita lacks any form of crowd-pleasing party songs that have become so typical for the band and is hardly convincing in terms of originality. These Finns have managed to create a decent album, but none of the songs actually seem to stick in your head after the album ends. If you’re a fan of the bands, definitely give the album a spin. If not, don’t hesitate to let the album pass you by, as there is better Korpiklaani (and better folk-metal) out there.