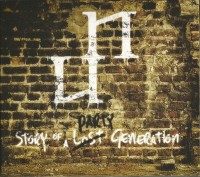 Belgium is already blessed with a Celtic Punk band called The Black Tartan Clan, but there’s more to discover in this small country. Nevermind Nessie is ‘doing pubs’ since 2009, but they had never recorded a ‘real’ album. But luckily they have decided to grab themselves together and record some decend stuff.
‘Story of a Lost Generation’, is a great punk title for an album. The Belgians put a lot of punk in their music, but with all these whistles, accordion and violin, it has great folk-elements as well.
And I really don’t care if the songs lean slightly towards the punk like ‘Off with Your Head’ or more to the folk as in ‘I know a Man’, it’s all just as fabulous and even when they set sails and sound more pirate-like in ‘Raise the Flag’, they sound great still.
Some of us like all this music in English, but ‘Luiaard met Baarden’ is great as it is in Dutch, even better it’s in Dutch in this nice Belgian way. With pieces of the great old folksong ‘Allen die Willen te Kaapren varen’. Nevermind Nessie shows it don’t have to be in English all the time.
I can’t imagine anybody who can stand still while listening to their music, you simple have to dance, sway, wave you drinks or at least tap your feat in songs like ‘Will Ye Come to Dance’, ‘Liberty’ and the title-track ‘Story of a Lost Generation’. There’s no way you can escape their tunes, no way to escape some exercise and no way to escape a happy face.

‘Story of a Lost Generation’ may be a great title for an punk-album, there’s nothing lost about Nevermind Nessie’s generation. They have simply made a great Celtic Punk album.
Every track of this album is reason enough to visit them when they’re in you neighbourhood, but anthems like ‘I know a Man’ leave you no reason to pass on this album. When you’re a fan of bands like Flogging Molly, this should definitely be in your collection.