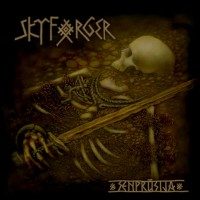 Skyforger is known in the folkmetal-scene for many years and with Senprusija they are up for their seventh album already. Skyforger usually has a great mix between blackmetal, heavy-metal and traditional Latvian folk music.
Frontman Peter tells us about their new album: Our new album “Senprūsija” (Old Prussia) is dedicated to the Prussians, the now extinct third Baltic nation. For us Latvia and Lithuania, the two remaining Baltic nations, it is very important not to forget this part of our common history and that is why we made this album.
Skyforger also wants to remind us that the Germans, who conquered Prussia, also started to call themselves Prussians; however, they had nothing in common with the actual Baltic people of ancient Prussia.
The awesome album art they made for this album also represents that there is nothing left of these people except for bones and archaeological founds.

Ei skija, skija, the intro song of Skyforgers new album is a song in Latvian. I believe these are the vocals of Edgars Zirgs, the bass-player. An awesome chant that gives me the old Skyforger goosebumps.
Senprusija is the first song on the album and shows us what direction the band is headed with this new album, it has much more blackmetal influences than the last records. In the introduction I wanted to tell you guys what the album is about because Skyforger always sings solely in Latvian. That’s also their first big bonus-point they score. But since I can’t speak or understand Latvian, I’m afraid I can’t tell you what the lyrics of every song specifically are about.
Coming to the second song a feeling creeps on me that says there is less folk on this album, it still has the pagan vibe and also the Skyforger vibe. But this will probably due to the fact that since the last album the man on the traditional instruments Kaspars Bārbals has left the band.
The music so far is pretty catchy and is, as usual, mainly up-tempo. Never the less the album has a much darker sphere, this might be due to the fact that it contains less flutes and other folk instruments, it could also be due to the lyrical theme of course.

My personal favourite song is somewhere halfway the album, it is called Ramava. An intro that even has some melodic deathmetal vibe in it, works its way to a massive wall of guitars. But after just over one and a half minute it crumbles down to an old-school Skyforger folk-tune with some awesome clean vocals. Almost magical! And after 4 minutes it goes on a rampage for a while before falling back to the wonderful clean vocals of Edgars Zirgs.

There is more folk to be heard on Divi Brali, bagpipes and flutes. I must say that I like the new sound even if it contains less folk instruments, but I would lie if I’d say that I don’t miss the bagpipes. Thank Skyforger for giving me a few.

A last highlight I want to mention is Zem Lietuvas Karogiem, the last song of the album. Kicking off with some blackmetal guitars. Combined with the cleanvocals/mumbling of vocalist Peters, the very iconic vocal style of Skyforger that you love or hate, for me it’s love. Great catchy song, I want to sing-a-long, unfortunately I have no clue what they’re singing. After 3 minutes it comes to the clean vocals again, like an amazing Latvian choir. Whatever the words are, they creep unto you, grab you, magical chants that get hold of you, something Skyforger can do like no-one else.

This album written to remember the old Prussians is also a great honour to these tribes. Skyforger made another masterpiece with this album, in a way only they can do it.