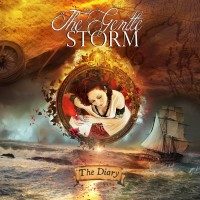 Folk-metal, is where Folk and Metal collide. And this causes a lot of discussions, but I won’t describe the Dutch band The Gentle Storm as a Folk-metal band. And they put this tag on their own music neither. Progressive/Symphonic Metal that’s a better tag.
But this album ‘The Diary’ contains two discs. On ‘The Gentle’ disc are the same songs as on ‘The Storm’ disc, but they’re acoustic much more folky tracks. On ‘The Storm’ disc are these songs covered in a nice metal-coating. So Metal and Folk collide here for sure. And there’s pure beauty in this album. How is is possible a new band can make a masterpiece like this?
Well, the working relationship of the two main brains behind this band dates back to 1998 and the project unites two of the finest musicians we have in our small country The Netherlands.
Ayreon mastermind / multi-instrumentalist Arjen Lucassen and vocalist Anneke van Giersbergen – who rose to fame with The Gathering – originally crossed paths in ’98 for Ayreon’s breakthrough third album, Into The Electric Castle. Both having established themselves as world renowned heavy metal / rock artists in the decade between releases.
Anneke and Arjen are from Holland and they decided it would be interesting and authentic to base The Gentle Storm concept on something Dutch. The obvious choice for them was to focus on the Dutch Golden Age in the 17th century. It was a unique time of remarkable progress in art, mathematics and science, and much of that progress was happening in Holland. “The art alone from that period is a rich source of inspiration,” says Arjen. “You can’t really look at a painting by Rembrandt or Vermeer and not feel inspired.” The album concept is a tale of love, loss, and separation told through the story of two fictional seventeenth-century lovers. A Dutch sailor embarks on a two-year voyage, leaving his wife at home in Holland. The only way for the couple to communicate and keep their love alive during the long separation is through letters. These letters form the basis for the songs on the album.
The great skills of both musicians can be felt throughout the whole album, with great compositions and a lot of authentic instruments, which enrich the feeling of history and folk, and not only Dutch folk as can be heart in songs like ‘Heart of Amsterdam’, but in songs like ‘Shores of India’, you can hear Indian folk-influences. This blends all perfect in the story, in which one of the lovers is sailing across the world as the Dutch were famous for in those days.

A beautiful historical piece, which is indeed not a folk-metal release, but it’s an album where folk and metal collide. An album with numerous authentic instruments and lots of history. And this all made by some very skilled artists. Simply beautiful, every Dutch historical museum should put this music in their CD-players to add an extra dimension to Dutch history.