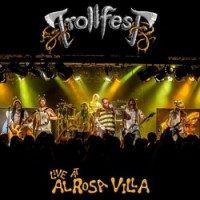 Hearing that Trollfest had a live release coming out was both a time to reflect on the past and to ponder the upcoming future. The past comes back to me because of seeing them on this tour (Paganfest USA) 2 days after this was recorded. This also has me foreseeing the future, seeing them again at the end of May as they wind down their US tour with Korpiklaani and Ensiferum.
The set list here is longer than the show that I saw them at in Philadelphia and deservedly so, if you are playing at the historic Alrosa Villa, you should really showcase all your wares. You never know what you are going to get with a live recording, either super polished with tons of overdubs which might as well make it a studio album or on the other end, a terrible mix and unlistenable recording. Luckily, this has the feel of a really good bootlegged recording with everything audible and not overproduced. While being a 2 year old recording, unfortunately no material from “Kaptein Kaos” appears here but a few tracks from the whirlwind “Brumlebassen” and other choice cuts from their catalog, namely crowd favorites “Der Jagermeister” and “Brakebein” amongst others.
The intro right into “Den Åpne Sjø” is classic as it sucker punches you right into the beginning of their set. I wish this had possibly been release prior to “Kaptein Kaos” in some respects since it would be great to hear some of the newer tracks live here but that is just me being nitpicky. Trollmannen leads the ceremonies with some corny jokes in-between songs while also directing the fray with audience instructions on how to properly mangle each other. The songs also do not spin out of control which can normally happen with songs as breakneck as Trollfest songs tend to be. TrollBANK manages to keep pace with the songs as they are on the original recording without letting the adrenaline of a live show over take the tracks. This release really does a pretty good job of capturing the whole experience of a Trollfest show without the visual to accompany it. While not exactly like going to a show to experience it first hand, it is a good substitute until the real deal comes around again.
This may not be something I listen to all the time since it really does not substitute for Trollfest in the flesh but it does transport me to the first time seeing them live and really becoming a huge fan of theirs in the process. Definitely worth getting even if it is not to listen to all the time and if they are not coming to a town near you soon, this is as close it comes to the sound and feel of them live as I think you could get…..