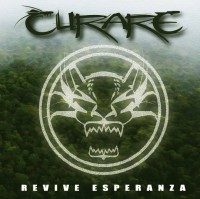 There are numerous times in my reviews that I try to give you some examples of what I hear when I am listening to a new album/EP/single or whatever, especially some sound alike bands. At first I was really struggling with the new Curare album in terms of who they remind me of and it was a challenge until I started going thru my internal rolodex of bands when it hit me, imagine that a hardcore or crossover band like Rage Against The Machine or Downset flew to Ecuador and started jamming on music written by the indigenous tribes. That is what Curare sound likes to me. I guess being from South America you would want to compare them to a Sepultura, Vorgrum, Skiltron, etc. but I do not hear any of those bands in their sound. If anything it is more world music and very diversified than the other bands and definitely to me has a more crossover/hardcore feel along with the folky touches.
Curare has a very rhythmic sound about them which can vary from complex accented patterns to straightforward blast beat. They really embrace the sound of the land more than a lot of other bands from South America in recent memory but also are very contemporary sounding at the same time. There are some very quirky sounding tracks blended in here too, so a System Of A Down comparison wouldn’t be too far off either. Tracks like the title track, “Yaku” and “Corazon De Jaguar” really sound like thrash or hardcore but then the vocals or flute get mixed in and that is where Curare throws you for a loop because it does not sound like what you think. “Todo Imperio Cayó” really sounds like an old Anthrax song until Curare twists it into something unique and their own.
“Tinku” starts with nice flute and guitar before the thrashing begins anew and bounces back and forth between the traditional and the metal…. this is a really different and enjoyable album from start to finish…..not overly long tracks for the style (3-4 minutes) and in a live setting must be something to behold (jump on Youtube). I also am a big fan of mix and production which really works with their style…. punchy bass and thrashy guitar with only a touch of layered vocals. Hopefully this will garner them some more interest internationally as it seems they have already conquered Ecuador.
I think a decent sized tour could probably get them over the hump into a lot of attention and fans…. I guess it is just a matter of time before they become as big as they should be…. great album