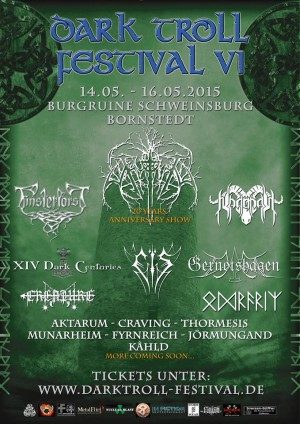 The most common discussion when the festival season starts is always about which festivals to visit, especially since there’s so much choice nowadays! There’s just one festival that’s been on the calendar as soon as the previous edition ended, and that’s the Dark Troll festival. With a line-up mostly focusing around pagan- and black-metal there’s enough to see already, but there’s always enough to do for those folk-hearted. Think about Munarheim, Saor, and Thyrfing for example, what could a folk-metalhead want more? Since we’re called folk-metal.nl for a reason, this report will focus more on the folk- and pagan-metalbands playing at the festival.

Day 1
Munarheim
Oh, I was so looking forward to Munarheim! Both of their CD’s are of high quality, and they have the potential to be the new standard in folk-metal. How disappointing was their live performance. It’s been a long time since I’ve seen a band play this bad. It’s hard to say if this was because of technical difficulties, the terrible sound or if the musicians aren’t ready yet for the bigger stages. Worst part was during ‘Liberté’, one of their better known songs, where they had to stop halfway through the song since they had no idea where they were anymore. The only good that can be said about this show was that the band was obviously excited to play at the festival. Too bad this wasn’t enough to make the show decent enough. I hope this was a one-time mistake, and sincerely hope that they can convince the next time, since their music is of high quality.
4/10

Bifrost
Bifrost is a band that never really got my attention. Although the music is good, really good even, the band never seems to be memorable when seeing live. The same was the case during Dark Troll festival. Don’t get me wrong; the band played quite good, though didn’t seem to come across like it could be. In terms of playing, the band was spot on and played well. In terms of stage presence, there’s still a lot the band could learn. Good show when just looking at how the songs were played, but not really memorable when looking at the overall picture.
6.5/10

Gernotshagen
Gernotshagen is always a pleasure to see when in Germany. Gernotshagen is always a recurring guest at the festival, and that’s never a bad thing! Tight sound, great performance and a great headliner for the first day. That the Dark Troll audience has a soft spot for these Germans is clear to see, and this results in an energetic performance. Here and there the band played a bit sloppy, and the show wasn’t without mistakes, but the (fairly drunk) audience couldn’t care less and gave all they got. Great closure of the first day!
8/10

Day 2
Jörmungand
Second day began with the band Jörmungand. I have to admit I didn’t know them before, but they certainly know how to convince. The band played with passion, and was clearly enjoying themselves on stage. Pretty standard folk-metal, with here and there some really catchy riffs. Only remark was the last song; it took a long time before this song reached its climax, and therefore felt a bit too long. Nevertheless a good performance and worth checking out!
7/10

Craving
Craving is hard to describe, but that they have their own, unique sound is for sure! A mix between death and black, with some folk-influences, this band has a good reputation when it comes to playing live. With a bassplayer that’s just out of a coma, they still played a full set, props for the dedication! The set itself was decent, but not the best I’ve seen of them. The sound was unbalanced; the drums sounded too triggered and the vocals sounded weak. The technical errors with the guitar didn’t work either. Frontman Ivan loves to set up a show, but asking 3 times to clap your hands, per song, tends to be a bit too much. However, the crowd loves it, with a small pit at the end as a result.
6/10

Saor
Saor is from a whole different level than the previous bands. Since Saor is focused on the atmospheric and melodic parts of black and paganmetal, it’s pretty important that the sound was right during this gig. Luckily for these Scots it was! The atmospheric pagan-metal was great to dream away, and many people in the audience stood there, enjoying their show with their eyes closed. The band played a perfect set, with highlights from both albums. The backing track was a bit low in the mix, but it worked perfectly! The band sounded harsher than on CD, without losing their melancholic, atmospheric nature. Great set for a band that deserves way more recognition!
9/10

Finsterforst
Finsterforst was the headliner for the second day of Dark Troll festival. This pagan black band started with some technical problems; the microphone didn’t work, so just shards of vocals could be heard during the first song ‘Zeit Für Hass’. After these problems were solved, Finsterforst performed a show like we’re used to: a highly energetic show, with both old and new songs, all perfectly balanced. Ultimate highlight was the last song: the epic ‘Fremd’, a song of 17 minutes which was played flawless. This band already proved it at the last Paganfest; Finsterforst is ready for the bigger stages, and is definitely a band to keep an eye on!
9/10

Day 3
Saxnot
If there’s one thing to say about Saxnot, it was that the audience loves them! First band of day 3, and already a big crowd gathered in front of the stage. The synergy between band and audience was terrific, and both were clearly ready to throw a party. A wall of death, a circlepit, a conga line, nothing was too crazy during this show. The music itself was okay, not exceptional. Although pretty standard, the band knew how to bring their music. All in all a good show, which was really enjoyable not only by watching the band, but watching the audience as well.
7/10

Aktarum
It was clear from the start that Aktarum was clearly not from Germany. While other, German bands playing early got a pretty decent following, the stage was quite empty before these guys started. If it was due to the fact that not many people know them, or the slight drizzle that passed over Dark Troll festival no one knows, but it was all soon forgotten when the band started playing. Aktarum played like they’re playing in front of a really, really large crowd, and seem to enjoy every minute. A catchy, chaotic whirlwind of Trollish music is what the people got who stayed and danced. Luckily for the band, the crowd got bigger throughout their performance. Aktarum showed that they can convince a small, difficult crowd as well: at the end everyone was dancing around on the tunes of Aktarum. Great performance by an enthusiastic band.
8/10

Thyrfing
Thyrfing had something special planned for the Dark Troll festival. A special 20 years anniversary set, with a set of 80 minutes. Almost one-and-a-half hour of Thyrfing, what do you want more? It was during this show that almost everyone gathered up front, to make sure nobody would miss a thing. The sound was sublime, just like the performance. The mix of pagan/black and here and there some doomish influences was undoubtedly the favorite of the audience. In 80 minutes, the band played songs from almost every album, a good mix between old and newer stuff. Of course you can ask yourself if 80 minutes isn’t too long, but the audience, just like the band, enjoyed every minute of it. Great birthday present from these Swedish guys, and a great headliner for Dark Troll Festival!
8.5/10

Rabenwolf
Serving as a kind of ‘after-party’, Rabenwolf had the questionable honor to play as the last band of the festival. The catchy folk-metal was well received by those who stayed to watch. Most people gradually left the front the stage to drink (even more). However, Rabenwolf put up a decent show. With so many people on stage it’s bound to be messy, and that the sound wasn’t great as well ensured that it was hard to define exactly what was played. The band seemed to enjoy pretty well, and knew exactly how to converse their energy unto the people still in front. Decent performance, though I feel this band could do a lot better on a different time-slot.
6/10