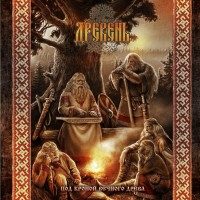 Dreven is the name of a pagan/folk metal band from Russia who is offering their first release here with “Под кроной вечного древа” (my translation is “Under The Crown Of The Eternal Tree”).
There will definitely be some comparisons to other Russian/eastern European folk metal acts, maybe a little Grai, Smuta, or Omut would be decent sound alike acts but Dreven seem to be a little more pagan metal oriented (maybe more like Kroda) with touches of folk so a little heavier. Don’t get me wrong, there is a definite folk presence for sure with an Eluveitie influence mixed in as well. There is nice use of flute, violin and what I believe to be accordion in tracks like “Дорога” (“The Road”) and “Легенда” (“The Legend”) which compliments the heavy riffing, growly vocals and rhythm section nicely.
The tracks are for the most part mid-paced with some up tempo parts to mix it up a little bit which is a nice change for sure. There is not a lot of diversity in song style here which I think would enhance this release as the songs do start to blend together as opposed to standing out individually. I think a future release should explore a few more options available to them especially having so many instruments and musicians at their disposal. There are some notes here both vocally and played that just don’t feel right (mostly flat) and I wish they had been caught in recording, mix or production as they tend to be distracting (sadly this seems to be something that is happening a lot lately, not just here).
The highlight for me here is their cover of Gods Tower’s “Rising Arrows” which I know might be impossible but Dreven’s version might actually be heavier than the original and has little more impact and texture than the original. I can hear the potential of Dreven but I don’t think they have come anywhere near to what they are certainly capable of. All in all, a solid effort and one to check out for sure as this a decent release and has some pretty good material on it.