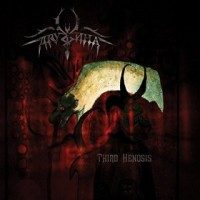 Sometimes here at the site we get so focused on “folk metal” that we get tunnel vision with regards to some other genres but that is just what we have to do. Luckily, from time to time, we get bands that will send things in that we may not normally review as it may not be for us. Thankfully Druzhina sent in their latest for review which I never thought would be something we would consider reviewing. It is amazing that they have and, even though I know we have them listed on the site, I just never considered that we would get this opportunity. I guess I could see them being considered dark folk much like Thormesis or bands that we don’t have listed like Amiensus, or Adabroc, but I always think of Druzhina as black/pagan metal for sure, blast beats, grim vocals, dirge keyboards, very old Darkthrone/Satyricon sounding in my opinion.
With “Third Henosis” I feel the Druzhina sound is definitely more accessible while remaining heavy as a mountain….and when I use the term “accessible” it definitely doesn’t mean they have changed their sound. There is a feeling of refinement to it with keyboards being slightly more prominent and the songs not sounding as frantic as they have previously. I believe they are crafting the songs now to just sound better and not having to rely on playing a thousand riffs per song, check out opening track “The Messenger” for example with variations of the same riff with different drum patterns and accented keys. Druzhina are letting the song breathe a little more I feel than they ever have in the past and becoming more alive by doing so.
Although tracks like “Three Headed Lion” and “Eclipse Of Mankind” do still have that connection to the previous releases, especially the more black/death metal feel material. Album closer “Psalm of The Void” at almost 14 minutes was wanting me to break out my Midnight Odyssey albums to listen to right afterwards, a primarily keyboard instrumental track before the blast beating rage back to keys is, in a word, monumental. The production has a fuller midrange sound to it than the previous releases, not being so “scooped” in the middle, basically better sounding period.
Again I am shocked that we got this to review but I am happy as a kid in a candy store that we did. I think this may be a little heavy for most pure folk metallers but for people like me that have a strong connection to black metal, this was a welcome surprise, maybe we will start reviewing some Drudkh next, wishful thinking on my part, great album.