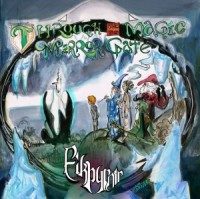 You will have to give me some latitude on this review as I have to give you a quick background story. Recently, they have been playing a documentary on TV about the rock group Kansas (American group famous for songs like “Carry On Wayward Son” and “Dust In The Wind”) and I have watched it numerous times and I really respect their musicianship and what they did with their different take on progressive rock. So fast forward to the latest release by Chicago’s Eikthyrnir….it hit me like a ton of bricks how much they sound like a 70’s prog band like a Kansas or Styx playing traditional based folk metal with a mix of some contemporary prog metal bands like “The Spectre Within”-era Fates Warning or Symphony X. If I had to give you a mash up of bands I would say Eikthyrnir sound like Kansas/Fates Warning/Jethro Tull/Queen/Yes playing folk metal, but I just went thru all my folk metal albums and couldn’t come up with one that I could say they sound like.
“Through The Magic Mirror Gate” plays like a rock opera/jazz album from the 70’s more than anything else…like “Tommy” by the Who or some jazz fusion like Return To Forever or Weather Report (yeah I listen to some other styles of music too). This album has ambitious written all over it, Eikthyrnir has swung for the fences on this one and it really hits home for me. I would be the first one to say that I typically don’t get into albums that are proggy but this one has hit me at the right time. Clocking in at 70 minutes with just 7 songs you will have to really sit and listen a number of times to really catch what is happening here….and what a trip you will go on. I question whether this is a “folk metal” release at all as it defies the boundaries and sits somewhere in the middle of too many styles to list, there does not seem to be a style of music that gets touched on here from middle eastern to jazz to death metal. Album opener “Wind Age Wolf Age” (at just less than 15 minutes) will have you scratching your head and wondering if you are anywhere in this cosmic plane, and that is the 2nd longest track on the album.
As a 7 piece, there is a lot of activity coming at you from all sides with particular attention to different time signatures and highlighting different instruments throughout the entire album…..whether or not this is a concept album I am not sure but it does have a feel of one, at least there seems to be a common thread. I would say there are a few bum notes and missteps here and there that seemed a little forced (whether vocally or otherwise) where maybe a little restraint and self-editing would have worked instead but those pale to some of the other amazing things happening. Eikthyrnir have just broken all the rules and thrown everything at you including the kitchen sink and all the plumbing.
Will this album have “mass appeal”? Time will tell as I think it may be too quirky for some and not folky enough/too proggy/all over the place for others….like I said they caught me at the right place and right time. Waiting for Rick Wakeman to collaborate with Chick Corea and Frank Zappa to rise from his (way too early) grave to jam on some folky metal tunes? Since it is unlikely I believe this is what it would sound like…..a really different an interesting album.