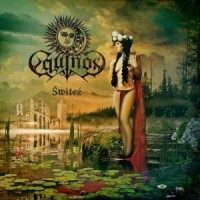 When last we left Equinox was the release of the “Lux Borealis” EP last year which I had hoped would lead to an epic future release which is now here with “Świteź”. If I had thought there were possible connections to originally being tied to Beer Bear (bassist Cyril’s project prior to Equinox) they certainly have been dashed with this new release. However, there is definitely a folkier vibe than on “Lux Borealis” with still a symphonic edge so they may be closer to Beer Bear than I think on some level but they are certainly entirely different projects.
The songwriting here is even better than on “Lux Borealis” with one of the best productions I have heard recently. Lead vocalist Alla Ravna picks up where she left off on “Lux…..” but even more powerfully than before.
Check out “ Огонь, Иди Со Мной (Энни)” (“Fire, Walk With Me (Annie)” as an example, Anna takes control like no other female vocalist I can think of, comparing her to vocalists like Liv Kristine, Anna Lee and Jill Janus amongst many others I think is definitely warranted. She has a very operatic approach which goes from full on aria to softer passages creating a lush tapestry with the instrument that is her voice. The songs across the board help to really showcase her vocals but do not, at the same time, make the music disappear and get lost under her voice. When I mentioned folkier, tracks like “Неман” definitely are reminiscent of a cross between Eluveitie and Trans-Siberian Orchestra. The Iron Maiden influence is certainly heard as well, especially on “Blitzhexen” which has a very similar sound structure to a Maiden track but then add in the folk influence and you get that hybrid style song here. Then, there a couple of 9+ minute songs here where the symphonic side of Equinox takes over again (“Свитезь” and the title track) with piano, violin and acoustic guitar highlights.
What I think Equinox has done here is brilliant, taking a little bit of each chapter of their existence (and even prior to) and combined it all here which may sound a little disconnected but really works. The piano/keyboard parts by Cyril can’t be overlooked here as they create yet another dimension to their sound as well. Guitarist Ivan and drummer Kirill are adept musicians who fill their roles to perfection with the right amount of personality and restraint to further the entire sound forward. The mix is beautiful and full of warmth (done by Sergey Lazar) with great separation and synergy at the same time, instrumentation is clear and almost sounds like a non-metal mix but still retains the heaviness where necessary.
Alas, I am forced to face the grim reality that Beer Bear is probably never going to re-emerge from hibernation. While that project lays dormant, Equinox will enjoy the warmth of the sun and hopefully much more praise for what is one of the best albums of the year…, an excellent release.