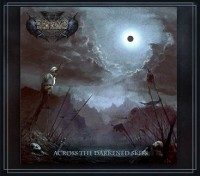 When I saw that an album by Fenris needed to be reviewed I knew it was one I thought I had heard before. Sure enough this was released back in 2014 via Bandcamp and since they are now on the site, we are giving it a proper listening to.
These Texans play a style similar to some other US bands, most notably my beloved Helsott, Hammer Horde and Yonder Realm, as they are not overly folky but have a more straightforward metal (Viking definitely) sound to them for sure…..I would call it “melodic death folk” (man I need to copyright that). As I have heard this a few times before, it is nice to revisit this as there is some really good material on here. There is the obligatory tracks included here…an instrumental opening (the title track), a LOTR song (“Nazgul”) and songs about pillaging and bloodshed (“Heathen Vengeance” and “Unbound”) As folky as they get is with “Dagen Droughl’s Ale” with tons of violin and “King Of The East” with some nice flute and piano work.
Some tracks have some keys mixed in as well for an additional element to fill in some of the gaps and create a little more mood. There is a definite old thrash vibe mixed in here as well with songs that are not overly long (3-4 minutes on average) so a good punch to the jaw with every song and then on to the next one….tracks like “Blind Gods” will certainly pummel you for a few minutes especially with killer bass work by Alejandro. Riffing by Josh and Braulio is tight and crunchy with a nice groove/pace set by double bass drum master Brennan. Lead singer Pete delivers lines with equal amount amounts of grit and command and does a really nice job of “selling” the lyrics. There is a killer cover of Blind Guardian’s “Valhalla” to close out the album too.
For a Bandcamp release, this has an overall nice production to it…. guitars have a real bite to them and the overall mix has a lively sound to it with nice instrument separation and backing vocals that are not over the top.
I think this is a pretty safe bet for anyone who wants to start listening to more folk metal but aren’t ready to go full on Korpiklaani or Finntroll as this album still is more rooted in power/thrash/death with a little taste of folk to cross over. If you are into the above mentioned US bands especially, I think you would really get into “Across The Darkened Skies” and it is sure to please a number of different metal heads. Although not a lot of folk for all you purists out there, Fenris has still put a noble effort out there to get your juices flowing…great début.