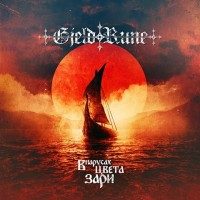 Russia’s Gjeldrune have returned after a short hiatus and recorded an EP entitled “V Parusah Cveta Zari” (“The Colors Of The Sails Of Dawn”). The style of the songs are certainly of similar style to their début LP “Shoronili My Svoy Kray”(“We’ve Buried Our Native Land”) from 2014. I think you always need to be concerned if a band will falter after a début with material that may not be as tested as their initial offerings but in Gjeldrune’s case, I think that they have refined their sound on this EP over the début.
From song writing to production I think the tracks here are more solid than the début…. bear in mind there are only two new tracks here…. the title track and “Volch’ya”. These two tracks have a little more of a refined sound over the tracks on “Shoronili…” with smoother production and a more focused songwriting style to them. If you want a direct comparison, they have re-recorded “The Green Mountainside” on the EP. While originally an excellent track, the re-recording has a little more feeling to it…. simplified and a little more dirge-y sounding. I would compare their overall sound to a multitude of more folky eastern European and Russian acts like Eldiarn, Omut, Equinox, Zaria and Brezno to name a few but I think that Gjeldrune may have the most accessible sound in comparison. As a bonus on here they have also included a cover of Volkolak’s “Voron Volk I Sokol”(“Raven, Wolf and Falcon”) which is decent,but I don’t know if it works as well in their style. The original has a raw more pagan sound to it but I commend Gjeldrune for doing it justice, again especially in the production department with a much smoother and better mixed version than the original. The last track here is an acoustic version of “Palets Na Spusk” (“Finger On the Trigger”) again from “Shoronili….” which was probably one of the heavier tracks on the LP so to hear an acoustic version is a definite bonus. I actually think I may like the acoustic version better since the emotion is more obvious but sadly is also an instrumental version which would have really solidified my choice with the inclusion of vocals.
With only 2 new songs and some bonus tracks here, it is definitely making me want a new full length from them. Until that happens this will surely have to tide me over until then…..