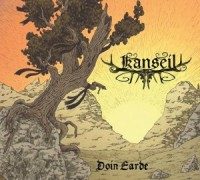 It has been a long time coming, the first full length from Italy’s Kanseil. Formed in 2010, they released a demo back in 2012 (“Tzimbar Bint”) and then it has been quiet on the recording side for Kanseil until the release now of “Doin Earde” (“Your Land”) via Nemeton Records.
Considering the quantity of members (7) I was curious what direction this release was going in and it surprised me by being heavier than I would have thought while still being very folky. I immediately thought of Finsterforst blended with Ad Plenitatem Lunae and Skiltron as the closest 3 bands I could mash together to give you a general guideline of the Kanseil sound. They have a sound that touches on all sides of genres on this side of the fence (folk, pagan, power, Viking and black) but it all meshes together with melody and cohesion. I am a sucker for bagpipe in metal (that is the Scotsman in me talking for sure) and they surely fill my cup with them as well as various whistles, kantele, bouzouki, mouth harp and rauschpfeife. Before I forget they also are a metal band with guitars, bass, drums and vocals…..all which gets mixed together on this stellar release. I love that they show restraint by not piling on everything at once and giving instruments the ability to be showcased rather than be buried. There is also a very medieval underlying current here but not overtly where it is a distraction from this still being a metal album.
There are 3 carry over tracks from the original EP (album opener “Lo Spirito della Notte”, “Mažaròl” and “Tzimbar Bint”) which are tracks where you can hear the progression on the tracks from a few years ago. These tracks still fit in nicely to the mix, albeit I feel a little simpler whereas newer material is a little more advanced sounding. “Panevin” is also a track that has been around for a while now too, a staple of live performances but not on the original EP and here now on the LP, deservedly so. There is also a nice blend of shorter as well as longer tracks ranging from 2 minutes to over 10 minutes…a little bit of everything. The mix and production is on par for what is needed with great separation of instrumentation, crunchy guitar and solid rhythm section with primary and backing vocals at appropriate levels.
I think there definitely is something for everyone on this release from the heavy folk to straight up metal and even the more acoustic based music is here as well. Ever have one of those days you are not sure what you want to listen to? I think the new Kanseil will surely have something on it you will love…..a great début album.