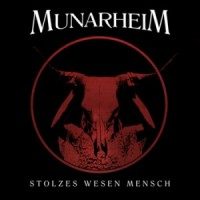 Just when you have maybe become fully immersed in Munarheim’s epic 2014 release “Nacht Und Sturme Werden Licht” (“Night And Storms Will Light”) they enter 2015 with another entirely new album with “Stolzes Wesen Mensch” (I am translating as “Nature of Human Pride”). At this rate, Munarheim may have a boxed set out next year with this amount of prolific-ness. The new album does not at all seem like a thrown together album but a logical progression, albe it much quicker than most bands get to their next album nowadays, so I wonder if maybe this has some tracks that didn’t make the first album for one reason or another with some newer material. Whatever the case is, you will definitely not be subjected to the “sophomore jinx” (if not familiar with the phrase, a tendency of a 2nd album to be never as good as the first). Munarheim self-describe themselves as “Black Symphonic Folk Metal”, not as black and symphonic as say Dimmu Borgir or Cradle Of Filth and not as folky as say an Equilibrium or Eluveitie or most other bands but they do sit somewhere in between for sure, especially when you have 9 band members you can’t help but be “symphonic”. What is nice with Munarheim is that it is never overly busy with this many musicians in play and it still has a heavier edge as the primary sound with the augmentation of keys, acoustic guitar, flute and female vocals.
Also, I appreciate the fact that they restrain themselves in terms of song length with tracks being 4-6 minutes for the most part, no need to write 10 minute songs every time, especially when you can pack as much into a shorter song. They even verge on having a soundtrack vibe, too. There are 10 tracks here (3 less than “Nacht…”) so they are refining the process in the Munarheim camp and only deeming what is necessary to make the cut. I think there is definitely something for everyone here, whether you tend to like heavier folk/black metal or the more symphonic/epic metal bands out there. I even hear, dare I say it, a “single” or two here, wouldn’t it be amazing if they could top the charts with a song?
Munarheim offer a nice conglomeration of all of these styles and certainly do not do it with an ego, making it accessible and non-pretentious. The production here works on all levels, with vocals and instrumentation being recognizable as individual tracks in the songs mixed with the proper amount of synergy and separation. Looking for a new black/folk/epic/symphonic album? You will get here with the Munarheim for sure, great release.