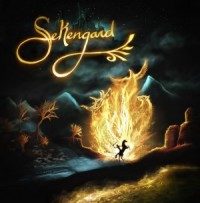 While 2014 saw a multitude of American acts in my top 10 list for the year (Agalloch, The Flight Of Sleipnir, Duskmourn, Yonder Realm and Helsott) I was concerned about the lack of American folk metal this far into the year…. luckily Wilderun, Isenmor and now Sekengard have restored my faith. Hailing from Baltimore (as does Isenmor) they have some similarities in sound and I don’t know exactly where it comes from other than they both have a very traditional/seafaring/tavern sort of style which is I think extremely “American” sounding. Of course being from the same town (reviewing Abracadabra/Svartby or Brezno/Zaria sharing similar situations) you can’t help but compare the two but Sekengard offers their own take and they have done an equally impressive job on their début.
There are 5 tracks here which if you have seen them live have all been in their playlist but now have officially been recorded properly. I think there are a few more world music influences here that have added an additional ripple to their sound…. middle eastern, Celtic and eastern European/Russian styles included with the ale swilling tracks. Sekengard sounds similar to me to Korpiklaani and Falconer mixed with pirate acts like Alestorm, The Privateer, Lagerstein and Swashbuckle with a few obvious differences, most notably lead vocalist Sarah Stepanek (who doubles on fiddle). Sarah goes from reserved to shriek on the turn of a dime and everything in between, all successfully. She also trades off vocals and riffing with Dan Paytas (Mandolin/Bouzouki) to give another layer to the tracks as well.
EP opener “To Sekengard” will certainly make you want to answer the call to drink, fight or whatever is going down at the wharf….”Drink To Victory” has a very Celtic vibe going to it before the thrashing begins. “Striped Paladin” has a medieval sort of feel to it and that is where you hear the most separation of acoustic instruments, guitars and rhythm section with very complex parts being played but not in a show off manner. “Howling Of The Fen” is just under 3 minutes of bludgeoning at its finest with another Celtic-y sort of start before the humppa fest starts.
“Unite The Divided” again follows the same template of pronounced fiddle, traded vocals and a thrashy rifftastic/blast beated background. Guitarists Carter Cassedy and Jon Robey are present on all tracks bridging the gap between acoustic instruments and the rhythm section of Adam Scalici on bass and Evan Phillips on drums.
Sekengard packs a ton of folk metal in for your EP dollars for sure and I think they are just scratching the surface of what they are capable of. The mix and production are decent…. maybe a little tweaking of guitar would help give it a fuller sound and vocals probably need a little more attention finding their place (especially backing vocals).

All in all, another great American folk metal release with more folk than most releases in general. So, what is the Baltimore sound in regards to folk metal? Not really sure but Sekengard definitely are one of a few who surely invented it…. great debut.