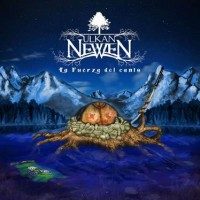 From the lands that brought you such acts as Skiltron and Vorgrum, South America’s Ulkan Newen have released their first album entitled “La Fuerza del Canto” (my translation is “The Strength Of The Song”) While sharing a general location of the previously mentioned bands (hailing from Chile to be exact) there is not a lot in common with Ulkan Newen and the other acts other than being high quality folk metal.
Ulkan Newen plays a style that reminds me of Eluveitie with equal parts of heaviness and layering of instruments with guitar driven tracks with both male and female vocals. The difference is in choice of instrumentation with Ulkan Newen using flute instead of a hurdy gurdy. Style wise they are also have a little more of a power metal sound I think as well, mixed in with their global folk base. There is a nice mix of track styles here (6 in totat, 5 tracks and an instrumental) so as full lengths go, I would call this more of an extended EP than album. Opening track, for example, “Hagakure (A La Sombra de las Hojas)” has an almost Middle Eastern or Asian influence to it. Next track “Werken Che” has a power metal vibe with the riffing and double bass drums like Hammerfall for instance. The other tracks show more of the same diversity and Ulkan Newen are not afraid to showcase their influences and are not necessarily pinned down to one particular style at this point. This could be both good and bad, good in the fact that they can play any of these styles adeptly but bad in the fact that they need to develop a uniquely Ulkan Newen sound to call their own. This is usually what I find to be the biggest concern with up and coming bands, what is your sound and how do you differentiate yourself to be instantly recognizable as “?”.
Ulkan Newen know how to play their instruments and write some really nice tracks here with a decent production (I did find it a little heavy on some of the instrumentation overlapping and not as blended) and I hope that they are able to develop from this point to a more refined sound that is their own.
“La Fuerza del Canto” feels to me like the best of a number of tracks that Ulkan Newen has written and put together for us (closing 9 minute track “Bahual” is as epic as it gets) and they have done a good job of giving us a little taste of what they are capable of going forward. Just a little more focus and direction and Ulkan Newen I think could be the next big folk metal band from South America…great début.