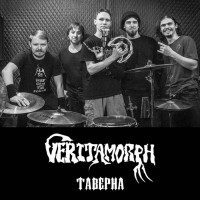 Veritamorph have released a 4 song EP entitled “Таверна”(“Tavern”) via their Bandcamp page. Hailing from Russia, I was prepared to start the comparisons to numerous other Russian folk metal acts when I began listening. I really don’t hear a lot of folk here but more of groove or thrash metal would really be better descriptions of their sound.
The 4 songs are 3-4 minutes in length and are simple in composition and basic metal songs. The last track “Ветер”(“Wind”) would maybe be the closest to a folk metal track of the 4 presented here, with what I believe is an accordion in the mix.
Ultimately, there are a lot of things they need to work on based on what I hear…. if they want to be folk metal, they certainly need to represent that better with some additional instrumentation. Secondly and more importantly, the recording of this EP has a very homemade sound to it and does not sound like a studio recording or if it was, really needs to be properly mixed. The instrumentation tends to sound very separated from each other not layered and the vocals are so far to the front of the mix that it tends to be distracting. Veritamorph needs to decide if they want to be included in discussions of Russian folk metal bands going forward.
Based on this release, I find them to be a groove/thrash band and not really folk metal…..