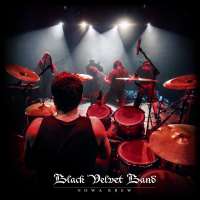 Straight on the heels of reviewing another single by Ad Plenitatem Lunae, I now have a single from Poland’s Black Velvet Band to check out. I still do not understand why bands feel compelled to release a single other than to get people excited about a new album so that is what I am hoping for here.
The song “Nowa Krew” is just under 5 minutes in length and has what I believe to be 2 notable points….the first is that it is less folky than their previous songs/releases and that there is no female vocalist included in the song. Here is where releasing a single can be an issue…..is this the new direction of the Black Velvet Band I am hearing with this new song? Is there no longer a female vocalist in the band? I don’t know because I only have one song to gauge where they are heading, whether in a different direction or not.
Whatever the case, the song is decent but not enough to get me really excited. Again, a few more songs (check out what Gjeldrune just did on their 5 song EP) and then this would be a little more to pay attention to. For now, let us wait and see what the new album is and we will go from there…..hopefully coming out soon….