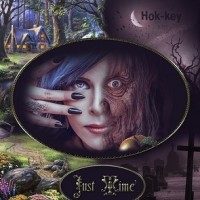 Hok-Key from Belarus has returned with a new EP entitled “Just Time”. The EP features a total of 3 songs….One new track (“Onto The Battlefield”) a redo of “Shadow Of The Beast” from their 2009 album “Ad Libitum” and a cover of Nightwish’s “I Want My Tears Back”. Whether or not this is a necessary release I guess is up to the individual but it certainly does have some nice material on it. I sense that Hok-key have been getting darker or more symphonic and maybe less folky over their last few releases but still have a pretty decent connection to older material.
The new track continues where they left off on 2014’s “Znak Biady” but with lyrics in English which I don’t recall them doing before. The song is decent with some nice folk touches of violin and female vocals. The remake of “Shadow Of The Beast” I feel is far superior than the original with a better overall feel and production than the original.
The cover of “I Want My Tears Back” is average and does not really compare to the original but was a decent attempt.
I wish Hok-Key had just waited until a whole new album was released instead of just releasing this EP. With other amazing bands from Belarus (Wartha, Omut and Alfar come to mind) Hok-Key has some major competition when it comes to being the number one folk metal export from there. Hopefully a new album will have a little more substance than this release…again overall ok but looking forward to next album.