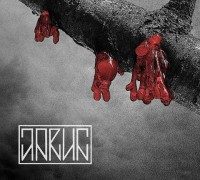 Poland’s Jarun have recently unleashed their 2nd album on us all entitled “Pod Niebem Utkanym Z Popiołu”. If you are looking for some folk aspects to this album all I can say is good luck as I would call this an album which leans more towards black metal, which is definitely OK with me. I guess the best description maybe would be “Dark Folk Metal” along the same lines of Adabroc, Mire and numerous others. I think the closest bands though by comparison would be someone like Mayhem or maybe even Satyricon so you should know which direction this album is heading. Overall, Jarun do have a relatively distinct sound with dirgey chords, dark passages, blast beats and haunting vocals. They don’t rely on the blast beat which is nice as they have some more mid paced cuts like the title track and also tracks that have mellow intros or interlude sections like “Cisy” which is a nice acoustic guitar instrumental or in the middle of “ Trzy Smierci” or in the album closer, the 10 minute “Jak Wiatr”. Most of the tracks here are over 5+ minutes so there is plenty of time to immerse you in the darkness that Jarun lays down.
Musicianship is definitely evident with all of the players holding down their own. Mix is decent with just enough heaviness and cleanliness to make it an enjoyable listen. Whether or not this is a folk metal able is the biggest concern for me….I don’t hear much folk unless you consider some acoustic guitar enough folk for you.
My opinion is this is a black metal album that has strayed over into folk metal waters. If you are into black metal, this is a decent release to check out nonetheless but probably not one you will find much folk in if you are not…..