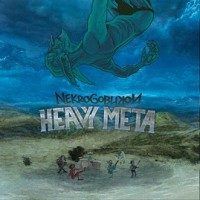 Abducted by goblins and only released to earth to tell the human society about the fate that awaits us, these guys from Los Angeles made quite some name the last few years. Started only in 2006, this is their third full length album.

The album starts pretty much with the same old trick, but since that is what I think is really awesome, I love it. A stupid guitar tune with some keyboards and grunts. The first song is pretty cool, however compared to Stench (which is their last full length album) it’s a lot less aggressive and powerful.
The same could be said about the second song, We’ve had enough. Everything is a lot more smooth, but personally I don’t think that’s a good thing. It takes out the joke of this band and doesn’t really stick in my head like most songs they’ve made so far. The clean vocals are pretty good again, much better than on their first album Goblin Island.
As also the third song just passes by, I start, for the first time ever, struggling to keep my attention to the album. Personally I think it would be really hard for them to outclass the Stench album, but for me this isn’t even coming close.
The first song that actually sticks a little is the sixth song of the record, of which you can also find a very funny music-video online. We need a Gimmick, probably the best song of the album. Still not what I was really hoping for but finally I hear something funny again. Also Full Body Explosion is sounding pretty good, yet it can’t compare to some of the older songs. I really miss that, since that was the nonsense I fell for in the first place.
It must be said that the second half of the album is a lot better than the first, but I still struggle to keep my attention to it.

Well according to the bands last song, we’ve found the magic Nekrogoblikon.

Personally I think the band wanted to do something a little more serious since there have been some comments after the “power” EP that they were becoming a lame joke. I couldn’t disagree more, and I’d very much like to see these guys return to the stupidity of Stench. Also to the less polished sound. A descent album still, but I expected a lot more.